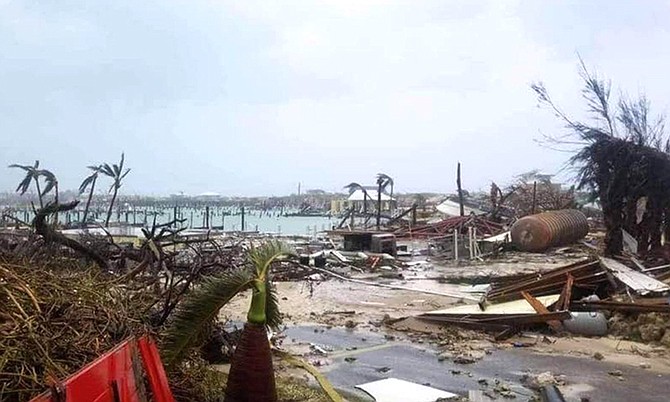 The scene in Hope Town after the storm.

The prime minister was unable to give any details regarding the circumstances of these deaths or reveal any identifying factors related to these hurricane victims.

However one of the victims was identified by his grandmother Ingrid McIntosh as seven-year-old Lachino McIntosh.

“He is the sweetest child I ever meet,” Ms McIntosh tearfully told ZNS News. She said her grandchild left New Providence three days ago, heading back to Abaco with family to get ready for the new school year.

Meanwhile Dr Minnis said the Royal Bahamas Police Force confirmed the tragic news of the deaths, adding that teams were set to go into Abaco as soon as possible for proper assessment and identification.

“I am concerned once one Bahamian dies,” Dr Minnis said when asked if he was worried that the death toll could rise from the storm.

Further details, he said, would come from Royal Bahamas Police Force Commissioner Anthony Ferguson and his executive team. However the commissioner declined comment.

Dr Minnis also said: “There are questions about fatality. Thus far the Royal Bahamas Police Force has confirmed that there are five deaths in Abaco. Teams will go to Abaco as soon as possible for full and proper assessment and identification.

“We are going to be very careful about reporting such information. It should only come from the official channel and be verified by the Royal Bahamas Police Force.

“We need to be sensitive in reporting such information and will do so as soon as we can have reliable information.”

During a press conference at the National Emergency Management Agency, Dr Minnis said initial assessments of Abaco had shown unprecedented devastation. The prime minister said there was extraordinary flooding and damage to infrastructure.

At its maximum strength Dorian packed winds of 185mph, leaving ruin in its path.

In the coming days, Dr Minnis said recovery efforts would commence as officials sought to help victims of Dorian’s wrath. Further, he said exigency orders to cover Abaco and its cays and Grand Bahama along with Sweeting’s Cay and Deep Water Cay were signed at Cabinet yesterday morning.

This will go along with the waiving of landing fees, customs processing fees for non-commercial flights and departure fees. Dr Minnis also said a hurricane relief and recovery committee was being formed and a coordinator will be chosen as soon as possible.

“I wish to report that the United States (Coast) Guard is already on the ground in Abaco and has rescued a number of injured individuals. Critically injured individuals are being taken to the Princess Margaret Hospital here on New Providence. Through various channels we are continuing to monitor events in Abaco and Grand Bahama as well as Bimini and the Berry Islands, which are continuing to receive tropical storm winds. And New Providence Andros and Eleuthera have been given the all clear.

“I strongly urge residents of these islands to be careful and diligent as they move about. I note that there is flooding in a number of areas in these islands.

“Various shelters are opened in New Providence for those whose homes have been affected. Further there appeared to be a number of fake and incorrect reporting circulating - please do not resend or transmit reports or images, which appear to be untrue. These fake news and fake messages can be very damaging, both to individuals and our nation.

“Many people in affected areas as well as their loved ones in the Bahamas and overseas are understandably worried. Please do not add to their anxiety and their worries.

“This is not the time to be creating mischief and playing on the emotions of others especially those who are most vulnerable at this time.

“There are also international and regional governmental and NGO teams ready to help assess the human needs and damages. We have in place and are putting in place other critical measures to respond as rapidly as possible to reduce any suffering and any pain.

“We are putting together a hurricane relief and recovery committee.. we will announce the coordinator as soon as possible.”

The government’s relief and assistance to victims will be extensive.

“Exigency orders have been prepared to allow donated and purchased relief supplies from registered charitable organisations to enter the affected areas free of customs duty and VAT in the immediate aftermath of the hurricane,” Dr Minnis said.

“Landing fees will also be waived in the affected areas as well as departure taxes and customs processing fees for no commercial flights. The orders cover Abaco, the Abaco cays, Grand Bahama, Sweeting’s Cay, Deep Water Cay and Water Cay.

“In addition to goods traditionally exempted after past hurricanes, we are including in these orders medicine and medical supplies, electrical generators, tents, cots, bedding material and mosquito netting.

“Individuals affected by Hurricane Dorian are included in the exigency order subject to verification by NEMA.”

As these efforts begin, there must be unity, the prime minister urged.

“As Bahamians we must unite with singular focus on helping our brothers and sisters in need. We will provide information as to where and how individuals, families and corporate citizens can donate resources and funds to assist those in need.

“Due to the extent of the devastation, when weather permits and transportation resumes, I ask Bahamians and residents on islands not devastated by this monster storm to open their homes to friends, families and others who may be in need. This is the time for us as Bahamians to show our love, our care and our compassion for fellow brothers and sisters.

“Your compassion at this most difficult hour will bring healing and hope to those who are traumatised by this destructive hurricane. Bahamians have a charitable spirit there are many who are ready to give generously.

He said heads of governments have also offered to assist, including those from Haiti and Dominica.

“I am concerned once one Bahamian dies,” Dr Minnis said when asked if he was worried that the death toll could rise from the storm.

Lives our being shortened in our country every day because of a failed public healthcare system, because of the BPL debacle which leaves the elderly and frail among us vulnerable to great stress and suffering, and now because of an ineffective hurricane preparedness plan lacking, among other important things, the means to enforce evacuation from declared evacuation zones. The people were promised it would be their time, but so far it has been much much more talk than action. The frustration levels of many Bahamians could not be higher.

The PM says he hates criminals .......... if you observe him, he treats the press the same way

Early reports indicate that hundreds are missing in Abaco and cannot be found by their family members and/or friends who managed to survive the horrendous and life threatening ordeal. The houses that many of these unaccounted for people were living in are literally gone as a result of the lethally high and fast raging storm surge. Truly sad.

Mr. Comrade House Speaker, yes, Google is indeed a powerful tool.... 'everybody' can understand that, yes, no ....- So said the even now looking more Google complexes Comrade Dionisio James,Tourism Minister - June 2019 - But wait there's more. Didn't the colony's prime minister, not just yesterday- issue plea for the populaces, not to take to Tweeter but wait for Erica and Acee's official 'red' government's spin-room to have first crack at writing their own official version on hurricane Dorian .... You just can't make this up ....

God Bless all of you. Many prayers! I hope everyone that can helps in your recovery.