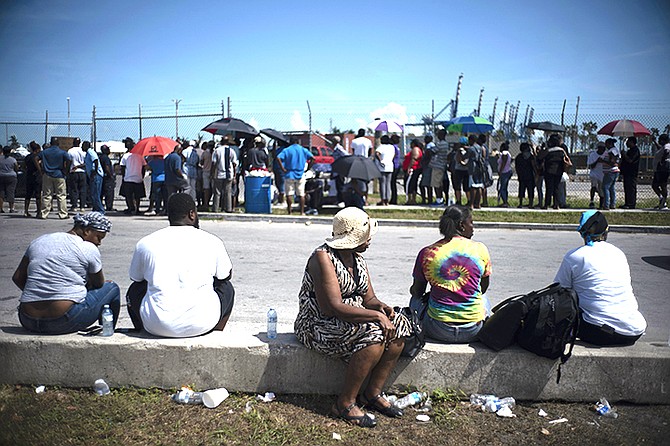 People gather at the port for aid sent by family members and friends in the aftermath of Hurricane Dorian in Freeport, Tuesday. (AP Photo/Ramon Espinosa)

LIVE UPDATES FOR WEDNESDAY CAN BE FOUND HERE

9.15pm UPDATE: From the Associated Press – Desperation mounted in the Bahamas on Tuesday as hurricane survivors arriving in the capital by boat and plane were turned away from overflowing shelters.

As government officials gave assurances at a news conference that more shelters would be opened as needed, Julie Green and her family gathered outside the headquarters of the island's emergency management agency, seeking help.

"We need a shelter desperately," the 35-year-old former waitress from Great Abaco said as she cradled one of her 7-month-old twins on her hip, his little face furrowed. Nearby, her husband held the other twin boy as their four other children wandered listlessly nearby. One kept crying despite receiving comforting hugs – full story HERE

5pm UPDATE: Florida Gov. Ron DeSantis says the state is sending the Bahamas enough bottled water to fill 10 tractor-trailer rigs the islands recover from Hurricane Dorian. DeSantis held a press conference Tuesday to make the announcement. He said Florida Power & Light is also contributing nine truckloads of water to the effort, and that overall, the state is helping coordinate $11 million worth of cash, supplies and services pledged to help the Bahamas. DeSantis said the water will come from the state's stockpile for its own hurricane relief, but he said that Florida still should be able to meet its needs should a hurricane hit the state this season.

Our @WCKitchen paella operation up & running in Freeport! This kitchen should cook 15,000 hot meals today thanks to our #ChefsForPuertoRico team working side by side with local chefs...The amazing Grand Bahama community is helping deliver meals to hard hit areas! #ChefsForBahamas pic.twitter.com/Swj1LAVi5y

Once a person is reported missing to the hotline, Social Services will check this information against lists of evacuees, ship manifests, people who are at shelters, or the processing centre at Odyssey Aviation.

Once a missing person is identified, Social Services will call back the person who made the report to let the individual know the location of the missing person.

The hotline can be accessed at:

Social Services will also continue to direct information about people needing rescue to the supporting teams.

11.50am UPDATE: From this morning’s NEMA press conference:

• All children displaced by Hurricane Dorian who are in New Providence will be placed in schools by the Ministry of Education. On Thursday there will be a registration exercise at the national stadium. This includes all teachers, students, janitors, school administrators and other employees who have been evacuated to New Providence. Students and employees will be reassigned to new schools in New Providence. Assistance will be provided for uniforms, school supplies and transportation.

UNICEF is on the ground and meeting with the Ministry of Education today to offer further support. Transportation will be provided from the shelters to the National Stadium on Thursday for the registration of students and employees. Details on the logistics of transportation and other information will be provided by the Ministry of Education and NEMA. Students who remain on Grand Bahama and Abaco will have access to education.

• There are currently 2,043 people registered in New Providence shelters. Three children’s homes were activated to accommodate 45 displaced children from the children’s home in Grand Bahama. As of 10am this morning these are the shelters being used in New Providence: The Kendal Isaacs Gym – including the tented area outside (1,357); Fox Hill Community Shelter (239); Calvary Haitian Baptist Church Shelter (85); Salvation Army on Mackey Street (27); Pilgrim Baptist Church on St James Road (64) and the Bahamas Academy Gym (226).

• NEMA is closely monitoring the weather – there may be some rain or thunderstorms in Abaco and Grand Bahama tomorrow and later this week.

• The Ministry of Environmental Health has conducted an assessment of the Equinor oil spill on Grand Bahama. There is no reason to be concerned about public health. The tanks appear to be structurally intact and there is no evidence at this time of an ongoing leak. During the storm, the two domes on top of the tanks were blown off, causing oil from inside the tanks to spill out. Since the storm there’s been no continuous impact to the marine environment from that oil spill. An active clean-up crew is arriving today from the US to manage that oil spill.

9.50am UPDATE: From the Associated Press: Thousands of hurricane survivors are filing off boats and planes in Nassau, facing the need to start new lives after Hurricane Dorian but with little ideas on how or where to begin.

Some sit in hotel lobbies as they debate their next steps. Others have been bused to shelters jammed to capacity. Some got rides from friends or family who offered a temporary place to stay on New Providence.

The government has estimated that up to 10,000 people from the Abaco islands alone will need food, water and temporary housing as officials consider setting up tent or container cities while they clear the country's ravaged northern region of debris so people can eventually return.

• MORE than 1,600 people are in emergency shelters in New Providence, according to the National Emergency Management Agency, as Hurricane Dorian’s decimation forced 4,800 people to be evacuated to the capital. Earlier Monday officials said there are six shelters in Nassau with a total capacity of 1,676. However last night, NEMA said in the aftermath of Dorian, 1,676 people have had to utilise shelters in New Providence. NEMA did not make clear if additional shelter space was brought online to address the need - full story HERE

• THE Bahamas faces one of the greatest challenges in its history in trying to rebuild lives and infrastructure in the wake of Hurricane Dorian’s unprecedented destruction, Governor General CA Smith said last night. Mr Smith spoke during a national address that aired on ZNS. Prime Minister Dr Hubert Minnis is expected to address the country tomorrow night - full story HERE

• THE chaos that gripped Marsh Harbour in the wake of Hurricane Dorian has subsided, and for those who remain, a new fight for survival begins. For some, remaining on the island is a testament of their heritage and resilience, but for others it’s just a balance of odds for survival. In Marsh Harbour, work crews continue to clear the roads while officers from various agencies conduct search and recovery missions – full story HERE