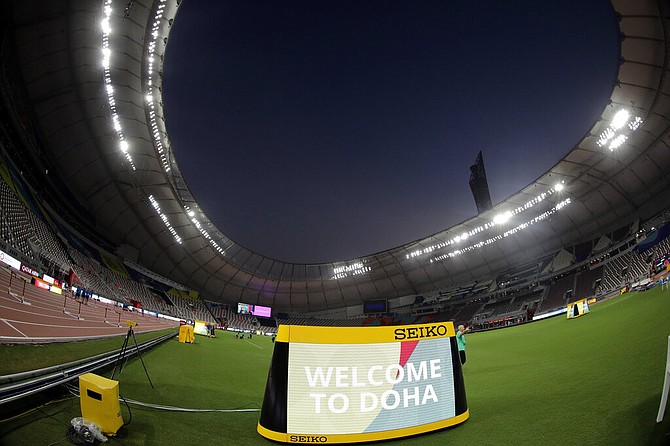 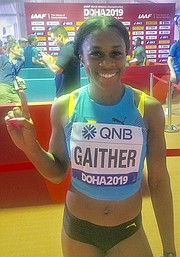 DOHA, Qatar: Running blind out of lane two of the women's 100 metres heats, Tynia Gaither bolted out to a terrific start, but didn't see the rest of the field as they reeled her in.

Competing in his first sprint double at the International Amateur Athletic Federation's World Championships, Gaither overcame the jitters in the first event on day two at the Khalifa International Stadium as she surged to a fourth place finish in the fourth of six heats in a time of 11.24 seconds.

That was good enough for 16th overall with the fastest non-automatic qualifiers for a spot in Sunday's semifinal on day three, starting at 2:20 pm EST.

She will run out lane three in the first of three heats, next to Jamaica's Elaine Thompson in four, for a spot in the final at 4:20 pm when the first two finishers and the next two fastest finishers will advance.

"I couldn't see anything. I didn't know how fast I got out, but that was something that I was working on," said Gaither, who led the race for the first 70 metres. "It felt really good.

"I couldn't tell my pace in the race until the last 20 metres, but overall my body felt great, relaxed and focused. I got my jitters out. My mind is where it should be."

After she got caught before she reached the finish line, Gaither trailed Great Britain's Dina Asher-Smith, who won the heat in 10.96 and American English Gardner and Jamaican Jonielle Smith, both in a photo finish in 11.20, for second and third respectively.

Jamaican Shelly-Ann Fraser-Pryce set the stage by posting the fastest qualifying time ever for the championships in 10.80 to win the first heat.

Marie-Josee Ta Lou of the Ivory Coast followed that performance by equaling her lifetime best of 10.85 to take heat two.

Despite the times, Gaither said she aims to come back on Sunday and secure her berth in the final. She will have to get out of the semifinal at 2:20 pm on day three for the final at 4:20 pm EST.

Gaither, 26, comes into the championships having ran her lifetime best of 11.04 this season. She will come back on Monday to pursue her quest for the 200m with Anthonique Strachan, starting at 10:05 am EST.

"I just want to speak on behalf of Team Bahamas. Everything that we do out here, although we are a small team, we are doing it with you in mind," she stated. "We're still grieving, but we are putting all of our energy out there to make you proud."

The Grand Bahamian native said although she was in Europe competing and training for the championships, she heard that some of her family members were adversely affected by the passing of Hurricane Dorian, but no lives were lost.

She added hat she's disappointed that the Bahamas won't have any relay teams competing here in the championships: "That's very painful, but next year and the year after, that won't happen."

And she assured the public that the athletes will have a sit down and make it a priority to "show up" in relay events at these games.

Even with Strachan along with three quarter-milers – Shaunae Miller-Uibo, Steven Gardiner and Alonzo Russell – the Bahamas was not able to get into the first mixed gender 4 x 400m relay heats that was contested on Saturday.

The Bahamas was not able to obtain one of the top 16 times in the world in order to compete here in either the women's 4 x 100 or the men's 4 x 400m relay, two events in which the country has had a great deal of success in the past.

Here's a glance of what to expect next week:

(First three in each heat and the next three fastest finishes advances to the semifinal on Monday at 1:50 pm.

Tynia Gaither in lane three in the first of three heats.

(First two and next two fastest finishers advance to the final at 4:20 pm EST.).

Terrance Jones - If he advances.