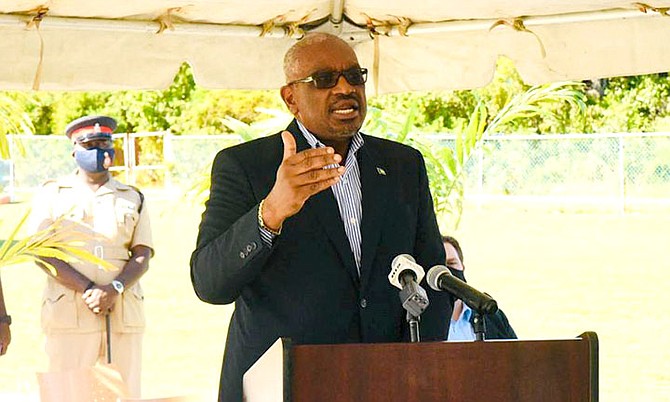 PRIME Minister Dr Hubert Minnis told reporters on Friday that he is “totally against” oil drilling in Bahamian waters and suggested that the government would have backed out of a controversial oil exploration deal if it could have.

“I am totally against oil drilling in our waters,” Dr Minnis told reporters on the sidelines of an event in Abaco on Friday. “Totally.”

Bahamas Petroleum Company plans for the Stena IceMAX vessel to begin drilling Perseverance One in waters some 90 miles west of Andros, close to the maritime boundary with Cuba, on December 20.

The entire exercise is expected to take between 45-60 days, and the oil explorer has repeatedly argued that - as a non-production well - the chances of any oil spill will be minimal and it will be capped afterwards.

This week, activists filed an application for judicial review to stop the oil exploration.

Prime Minister Dr Hubert Minnis was in Abaco on Friday to give an address at a Crown Land grant ceremony in Crossing Rocks. (BIS Photos/Yontalay Bowe)

On Friday, when asked about concerns about the environmental impact of oil drilling, Dr Minnis said: “I have said that before and that has not changed. Unfortunately, we were saddled with an agreement that we met there. When we discussed it with the legal department, we were advised that the commitment and everything was signed and basically we could not get out of it.

“But if we could’ve gotten out of it believe me, I am against totally drilling for oil in our waters.”

BPC’s oil exploration licences were given during the first Christie administration.

Several members of the Progressive Liberal Party have had ties to the company in the past.

Former prime minister, Perry Christie, once served as a consultant to BPC when in opposition. Davis & Co, the law firm of current PLP leader, Philip “Brave” Davis, acted as BPC's attorneys when it first came to the Bahamas, although it no longer serves in this capacity. Mr Davis has recently indicated his backing for exploratory drilling.

And what is his position on aragonite and salt and other natural resources being outrightly stolen or frittered away?

My guess is it is the same as for oil. Oil will be found. Oil will be sold just like the aragonite and salt and sand and who knows what else is going on behind our backs, and they money will simply vanish.

But ... just be sure on July 10th you get out there and celebrate and jump around and dance to the music. Fun fun fun.

To suggest that in today's climate there is nothing we can do about oil drilling is utter nonsense. I don't buy it. Our politicians who have a financial interest in this need to be outed.

COuld the Tribune speak more to the arragenemnt? if they find oil then what? everyone walks away?

The government could keep this tied up in court and regulatory approvals forever if they actually wanted to stop it.

This is for true. All permits and regulations here take forever to deal with. Until you bribe someone...hmmmmm.....

The article states that this has been going on since the first Christie administration. He first came to office in 2002, so that's as much as 18 years (perhaps a little less).

This is nothing but total BS coming from the hypcritical lips of a most incompetent authority and corrupt PM. It's just unimaginable that Minnis has been able to order us Bahamians around as he has done, literally stripping us of so many of our Constitutionally guaranteed civil rights and liberties for months on end, and yet now (only now) does he have the audacity and gall to claim he can't stop a bunch of foreign shysters from using their BPC Ponzi scheme to profit from the endangerment our country's most valuable marine habitat.

No environmentally conscious Bahamian, especially the many younger ones who are now of voting age, should ever think about voting for this hypocrite of a PM in the next general election. I guess Minnis thinks his stupid minions have forgotten about our nation's many environmental concerns as expressed by him personally in New York City before a UN general assembly.

Minnis is assuring the FNM party that he and many other FNM candidates in the next general election will be toast and, come to think of it, that may be a very good thing for the vast majority of the Bahamian voters he now refuses to stand up for. There isn't a single contract or agreement between BPC and our country that was not fraudulently obtained and should not be declared null and void for that reason. No country is required to entertain the despicable goals of a corrupt foreign owned and sponsored Ponzi scheme run by scamming con artists who meet the very definition of shysters. That's just plain common sense.

You are exactly right on this.

2021 might be a good time to start an oil spill cleanup company.

It certainly would not surprise me to hear that the despicable shysters behind BPC have already formed just such a company as an adjunct Ponzi scheme to fleece a fresh batch of most foolish and gullible investors.

Maybe the Tribune reporter should have verified if such a deal that ties the hands of the government exists and provide information to the Bahamian public. I guess professionalism and thorough reporting is not the forte of this publication.

old chineese saying; Fools rush in where wiseman never never go. leave it alone,even if you find the truth, you are not going to like it,we were not taught this part of our history, titty fanny said; everything good to eat ,aint good to talk, remember;having a lot of children do not give theright to ownership. lemme do this one more time,´we were given the right to goveren ourselvers ,not own the land,did you notice the word GIVEN? which indicates?

Comrade Papa Hubert went fishin'. Pray that the other fisherman's Papa Jesus, doesn't!
First came the fake OBAN $3.5 Billion to teach what we need to learn about the meaning of the term “banana republic.” Shakehead a quick once for upyeahvote, a slow twice for not?

Minnis is not saying that Hubert Ingraham and Perry Christie were the slicksters that orchestrated this oil deal for their own benefit.

My comrade SP, Papa Hubert has sure gone all quiet with not a question whilst a government whose credibility is seriously in question. has he once asked of his 34 House-elected colleagues, why are you silent in allowing the premiership one man's does all this bad stuff be much negatively impacting a colony, a PopoulacesOrdinary at large, and the redcoats party?

As I said many times, the only supporters of this oil drilling project in the Bahamas are those on the payroll of BPC. Therefore it is time to investigate who issued the permits and on what basis.

The premiership Mr. Minnis has become lost, thrown off the planned course- knowing there won't be a second term in the White House for the Republicans. Unlike Lynden Pindling and Papa Hubert, both weaned on breastmilk - em's physiologically faltered much earlier.

I am starting to understand you, Tal. A bit.

Comrade Porgu, could be that the more clarity owed mostly experimental comin' up with a whole new recipe, and the bakin' process behind my homebaked brownies, and also a lot to my gettin' early kick start's dependency on breastmilk.

They DO NOT understand... if we continue to use fossil fuels then Bahamas is gone within this century. Covered by water. What are they taking to dream about oil in the 21th century? Or better to ask: how much was the bribe?!

Tricky politics from politicians. Minnis was against VAT when in opposition. When Minnis became PM, he increase the very thing he said he opposed. Minnis says he is against drilling because he can day that. The deal is already sign d , so he can say he is opposed to it to get voters on his side. He looks like a rose for saying he opposed it.

Big bunch of lying caca. What a wonderful doctor we have leading our Country. Ever wonder why he gave up doctoring for politics?

BTW, wonder how much those fancy police masks cost the taxpayers whom the "covid ambassadors" fine for not wearing theirs?? Instead of giving out masks to the People, Minnis's goon squads fine those that cannot afford such fancy facial nonsense. What garbage. We are supposed to believe he actually cares about our ecosystem?

Cancel the agreement then. With no oil found the damages would be low, even if they could prove damages. If however, they find oil, the cost to cancel the agreement is many many times higher if it somehow went against the Bahamas in court.

The longer this goes on the much harder it will be to stop. Saw they find oil, they will want to do multiple wells, maybe even farm out parts of the license to other companies. It takes only one to leak to have a disaster on our hands. Once you start drilling you can never stop.

This company have been in the Bahamas for over a decade. Legal contracts were signed and fees paid annually to the government.

The fact is that the government need this potential revenue. If the drilling is done safely what is the problem??

"What is the problem? You appear too ignorant or too sold out to understand. Just another "deal" for you? Do you even visit The Bahamas?

"When Pilate saw that he could not prevail at all, but rather that a tumult was rising, he took water and washed his hands before the multitude, saying, “I am innocent of the blood of this just Person. You see to it.”