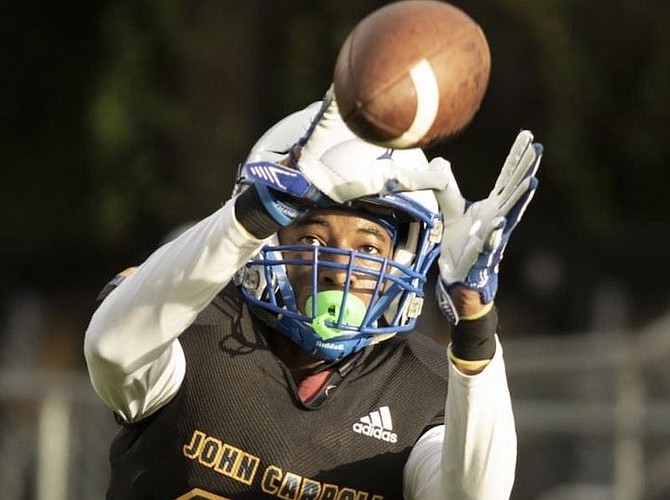 Stracahan racked up 10 receptions for 143 yards and two touchdowns for the Fort Pierce, Florida powerhouse in their 37-12 win over South Fork High last weekend in Florida.

Through five games thus far, the 6’4” Grand Bahama native has emerged as a deep threat en route to the Rams’ 4-1 record on the season.

He caught three receptions for 76 yards and two touchdowns in a 27-0 win for his Rams over the Port St Lucie Jaguars in the season opener.

The Golden Rams also won 23-0 over the Okeechobee Brahmans and 47-14 over Avon Park before a 57-28 loss to Treasure Coast.

They look to improve to 5-1 against Fort Pierce Central on October 16.

Strachan relocated from Grand Bahama to John Carroll following Hurricane Dorian last year. He played sparingly as a sophomore and the Rams are were high on his prospective impact headed into this season.

Thus far the younger Strachan has already received an offer from the Golden Eagles.

Mike Strachan, was recently listed among Yahoo! Sports’ top “small school” prospects for the 2021 NFL draft and a preseason All-American.

Both young receivers look to continue the lineage established by their father at the position.

“My dad, Jerome Strachan, He played football at Bethune-Cookman under head coach Larry Little. He was part of the Dolphins team that went undefeated in the 70’s. My dad learned a lot from him. He also played wide receiver in college,” Mike told NFL Draft Blitz in a recent interview.

“He taught me how to be tough. The major thing is having the mental toughness.”