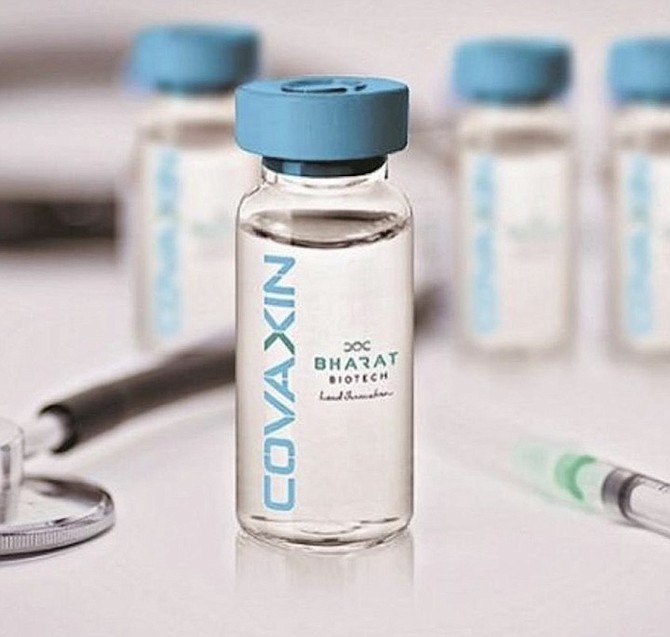 INDIA’S Bharat Biotech International claims to have developed “the world’s safest” COVID-19 vaccine and is hoping to register nations in the region as customers as soon as the World Health Organisation gives the drug the seal of approval.

Speaking to Bahamian and Jamaican reporters during a virtual press conference yesterday, Bharat Biotech touted the development of Covaxin, a vaccine with 60 percent efficacy in its third phase of clinical trials.

Covaxin is India’s indigenous COVID-19 vaccine, developed by Bharat Biotech in collaboration with the Indian Council of Medical Research (ICMR). The drug has already been approved by India for emergency use, and millions of the country’s health and frontline workers have already been vaccinated with it.

Suchitra Ella, the company’s joint managing director, said she is confident the WHO will approve the drug which will soon be studied by the United States for approval by the Food and Drug Administration there.

She told reporters: “I feel quite confident that Covaxin will get the WHO’s approval. I am sure when the data is released to the world, as early as we can, I think the WHO will certainly approve Covaxin based on its efficacy and safety data.

Indian High Commissioner R Masakui said the wheels are already in motion to hopefully get The Bahamas on board.

Ms Ella said the company is confident in the vaccine’s safety.

She said: “The cell inactivated vaccine is probably the safest vaccine in the world. I’m not saying this because it is our vaccine, but this technology platform using the entire cell of the virus itself is the safest route. It is proven and time tested. Having said that, any vaccine is prone to give small reactions to the person that is taking it.

“We have already proven in our phase one and phase two data that the vaccine is 60 percent effective which was in a smaller subject population of less than 400. Phase three data, which is just completed, will prove if there is anything more than 60 percent. “For now we have satisfied the minimum requirement of 60 percent efficacy that is required for the vaccine to be deployed in any population in any country.”

India is set to export Covaxin to Mongolia, Myanmar, Sri Lanka, Philippines, Bahrain, Oman, Maldives, Mauritius and Bharat Biotech has signed agreements to supply Covaxin to the USA and Brazil. If details are worked out after WHO approvals are met, The Bahamas could be added to that list.

Minister of Health Renward Wells has stressed on several occasions the government would only consider importing and using vaccines approved by the WHO.

“The WHO procures from the Indian manufacturers,” said Ms Ella. “We ourselves distribute to more than 120 countries of the world a basket of various vaccines. Sixty percent of the vaccines produced in the world are manufactured by India under the WHO guidelines, the international guidelines and so forth.

“We will be starting the exporting Covaxin to other countries. As many as 20 plus countries have already registered with us for supplies of Covaxin. The very first shipment went to Myanmar – 200,000 doses were shipped.”

However before doing any business with the United States, there will have to be further studies done on Covaxin and applications have already been submitted to the FDA for the same.

“We also hope to start trials in the US very soon because we have markets where we have entered into commercial agreements with private entities,” Ms Ella said. “We will also start doing the bridging studies and trials that have to be done according to the guidelines of their regulatory agencies – whether it is the US or Brazil or whichever country is interested to take Covaxin into their markets in the private sector.

“Our partners in the US have now applied to the FDA to start the bridging study and the trials that need to be done in the US for taking Covaxin to their private markets.”

According to chiefs at Bharat Biotech, this vaccine is very inexpensive and pricing cannot be matched in any other county.

Ms Ella continued, “When a government procurement happens, it is in very large numbers in order to cater to the population. That determines the pricing for that particular requirement. No other country can supply vaccines cheaper than India. This has been proven time and again with many other vaccines. UNICEF and PAHO knows this.”

Meanwhile, Bahamian officials are awaiting 100,000 doses of the Oxford- AstraZeneca vaccine which are expected to arrive in the country soon. India has also approved use of the Oxford vaccine in that country.

The Communist Chinese controlled WHO and its affiliate the PAHO have no doubt told our health officials the 'special' vaccine Red China is strongly recommending for Bahamians is much cheaper, and even 'better' for us, than any vaccine made in India. LMAO