INSIGHT: Global problems such as COVID cannot be solved by adhering to national boundaries 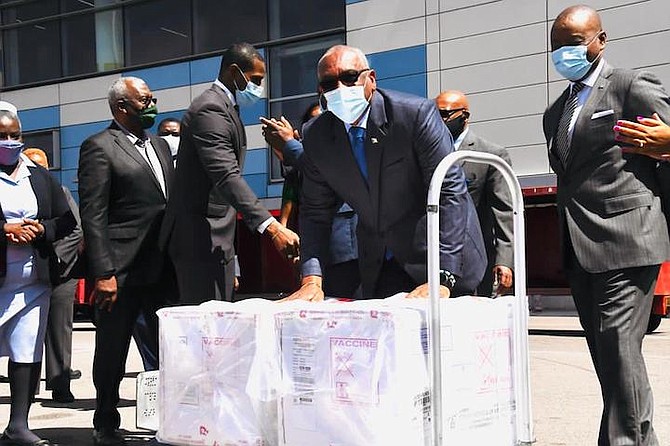 Prime Minister Dr Hubert Minnis with the vaccines after they arrived in the country on Wednesday. Photo: Yontalay Bowe

India High Commissioner to The Bahamas

It was on March 15, 2020, that the first COVID-19 case was confirmed in The Bahamas. More than a year has elapsed, and the pandemic shows no signs of abating. The situation is no better in most countries of the world. One of the few known ways to combat the coronavirus is the COVID-19 vaccine, developed simultaneously by many companies and countries across the world.

It was a matter of great honour to watch a consignment of 20,000 “Made in India” WHO approved COVISHIELD vaccine doses landing at the Nassau Lynden Pindling International Airport on March 10. The consignment was received by Prime Minister Dr Hubert Minnis, Minister of Health Renward Wells and Minister of Foreign Affairs Darren Henfield, and other dignitaries. The vaccine consignment is a gift from the people and the government of India to the people of The Bahamas and I am hopeful that the ‘Made in India’ vaccines will prove helpful in safeguarding the most vulnerable and those at the forefront in the fight against COVID-19.

The vaccine consignment to The Bahamas is part of India’s larger effort named ‘Vaccine Maitri’ or ‘Vaccine Friendship’, under which we have been able to gift more than seven million vaccine doses and a total of 40 million doses to more than 50 countries of the world, most of them being fellow developing countries from the south. The CARICOM has also been our focus with close to 500,000 vaccine doses gifted to the region to date. This as we undertake the world’s largest vaccination drive back home having inoculated close to 30 million, including health and frontline workers, and those over 60 years of age.

Many have asked in hushed tones what India seeks in return from distributing the COVID vccine. “There is more than meets the eye,” they say. “There is definitely some quid pro quo,” others state. I feel a sense of ‘déjà vu’ remembering that similar questions were raised when India’s Cipla company had slashed the price of AIDS recommended fixed drug combination in 2001 from $12,000 by western companies to $350 per year or less than a dollar per day, benefiting many in poor regions of Asia, Africa and Latin America.

In the case of coronavirus, India has realised that it is impossible to control the COVID-19 pandemic by restricting vaccination only to India. Global problems such as these cannot be solved by adhering to national boundaries. This is also the reason why; besides starting vaccination in India and gifting to developing countries, India has also opened up the Made in India COVID vaccines for use in COVAX facility, GAVI Alliance and for commercial procurement around the world.

The logic behind India’s approach can also be found in its age-old philosophy of ‘Vasudheva Kutumbakam’ which means that the world is one family. This philosophy is not just a speak-sake but has informed the Indian mind and our outlook to the outside world since time immemorial. It is this philosophy that is the core of India’s foreign policy approach and our emphasis on south-south cooperation. It is in this spirit that India also provided COVID related medicines and medical equipment including paracetamol, Personal Protection Equipment kits and masks to The Bahamas that reached here last year.

Another reason why India could pull off ‘Vaccine Maitri’ and medical donations is because of its huge pharmaceutical manufacturing and vaccine development capacity, built painstakingly over the years. India is the largest provider of generic medicines globally and also the only country with the largest number of US-FDA compliant pharma plants outside the US. With more than 3,000 pharma companies and over 10,000 manufacturing facilities, India is referred to as the ‘Pharmacy of the World’. Over 62 percent of the world’s vaccines also come from India and form the backbone of mass vaccination programmes by entities like the UNICEF and the WHO. Indian vaccines are not only uncompromising in quality and safety, but also the most affordable in the world. This is what prompted the United Nations Secretary-General Antonio Guterres to recently say that in the times of COVID-19, the vaccine production capacity of India is ‘the best asset the world has today’.

As far as COVID-19 vaccines are concerned, India has thus far approved two Made in India vaccines for emergency use. The first is the COVISHIELD being produced by the Serum Institute of India. The other is COVAXIN, developed by Bharat Biotech, one of the largest vaccine developers in India. COVAXIN has already been administered to many millions in India, including to Prime Minister Narendra Modi, with little or no side effects. Recently, the preliminary results from COVAXIN’s Phase 3 clinical trials have shown 81 percent efficacy. It is also claimed that COVAXIN is effective against the UK strain of COVID-19. The Medical Journal ‘Lancet’ has also called COVAXIN “safe, immunogenic with no serious side effects.” COVAXIN may also be considered for import by The Bahamas and other countries in the region, subject to approval from their regulatory authorities. About half a dozen other COVID-19 vaccines are in different stages of development in India, including an intra-nasal vaccine by Bharat Biotech.

WHO Director-General Tedros Ghebreyesus has also said that the world is “on the brink of a moral catastrophic failure” and has warned that a “me-first approach” in distributing vaccines “will only prolong the pandemic”. India firmly believes that the only way to defeat the virus is through cooperation and sharing of resources between countries. In the words of Indian Prime Minister Narendra Modi: “Today India, with not one but two Made in India vaccines, is ready to protect humanity.”

I have no doubt that with closer cooperation, we will be able to make progress in not only tackling the COVID pandemic but other global issues too like global warming, poverty and terrorism. I conclude with another ancient Sanskrit couplet, a part of which is also incidentally printed on the COVID Vaccine consignment that landed in Bahamas:

‘May all be at peace, may no one suffer from illness,

May all see what is auspicious, may no one suffer.’

Is it true that over 4 million people have died in the Bahamas of Covid since March of last year? Someone said that the other day and i was thinking our population is not even that large. Anyone know the real number? 50 thousand? Ten thousand?

4 Billion Bahamians died of Covid, May they rest in peace.

Amen. Sadly, may have been even more.

R MASAKUI, India High Commissioner to The Bahamas, seems to be just another carrier of water for the CCP controlled W.H.O.