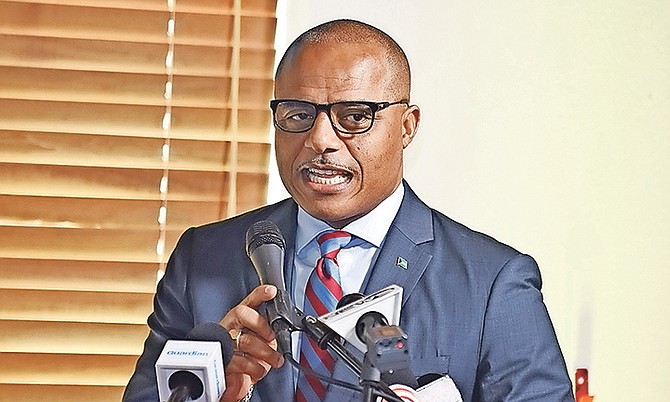 NATIONAL Security Minister Marvin Dames says that to introduce technological upgrades to the voting process one year before the general election could be a “daunting” task that confuses and complicates how ballots are cast.

The amendment to the Parliamentary Elections Act passed in December, which created a permanent register, also makes provisions to enable the issuance of biometric voters’ cards in the place of the traditional paper card and counterfoils.

Asked why this had not been done, Mr Dames said while work in this regard was ongoing, officials did not want to spark issues.

“The work is forthcoming,” Mr Dames said. “The Act is now updated and given the stage that we are at now we want this to be kind of gradual. We don’t want to cause any major upheaval or confusion a year or more out of elections.”

When his attention was drawn to the fact that there appeared to have been little upgrades to the process, meaning people were still expected to turn out to the polls to cast ballots despite the ongoing COVID-19 pandemic, Mr Dames insisted work has started to overhaul the process.

“There is (work) to a large degree,” Mr Dames continued.

“We have to get those critical amendments in Parliament to have them debated and now it’s the process of implementation. Implementation is more than just saying let’s get a biometric card.

“So, we are looking at coming up with a national ID card that will allow for this to happen but there are some other things that have to fall in place even before we get there and so we’re gradually moving to that point.

“We are trying to be very strategic because a little more than a year out from the election we don’t want to just throw it in all at once and we know this step of bringing in a permanent register, we want to get that through first.

“You know any time you reach this period anything that you introduce or any changes that you make as simple as it may look could prove to be very complicated and daunting.

“We don’t want any miscommunication, so we are being especially strategic here.”

Despite this, he said the ongoing voter registration process has been going well with plans in the works to visit a number of registration centres.

Centres for voter registration opened on Monday, in a rollout of a phased plan to expand the existing register to first time voters and people needing constituency transfers before the next general election.

The existing register currently has 186,763 voters and officials say they expect about 20,000 new voters. However, acting Parliamentary Commissioner Lavado Duncanson was unable to say how many people have registered so far during a press conference last week.

And despite current social distancing protocols and restrictions on gatherings, it was suggested that thousands of voters will still be expected to physically visit polling divisions to cast ballots at a time when officials have advised against super spreader events.

Mr Duncanson could only say efforts were underway to ensure voters have the safest experience possible. He also could not say where officials were in establishing a biometric voter’s card. The paper voter’s card will continue to be used, Mr Duncanson said.

Anyone know whether they've hired Dominion and Smartmatic to 'fix' things the way Minnis wants them fixed? LMAO

Would be just like the usa elections when governors changed rules months before the election.who cares. They will probably count the votes in minnis' or braves house. Who cares, it is a.botched election before it starts.