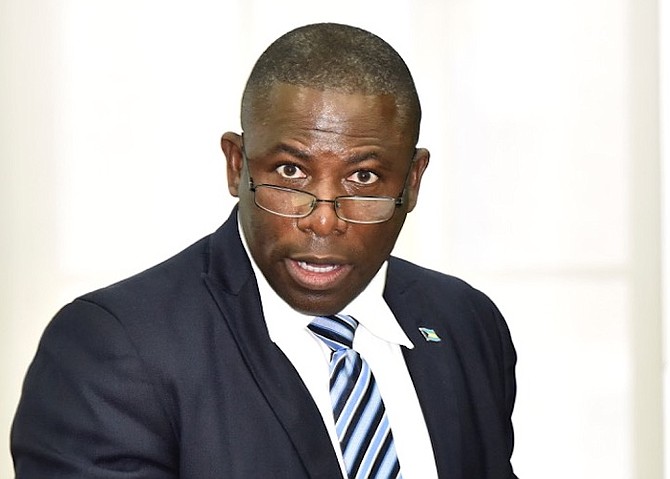 HEALTH Minister Renward Wells says his ministry will not make a move on approving any form of additional COVID-19 testing unless first receiving the nod from the World Health Organisation to which it is aligned.

Oxford University’s RT-LAMP Technology and CommonPass COVID eApp, which has quick test results loaded to a person’s cell phone within minutes of taking, is becoming more popular for use in airports and airlines around the world.

So far the test is being used at Heathrow and Manchester airports in Britain and in airports in Hong Kong, New York, Singapore and Toronto. And, British Airways, JetBlue, Lufthansa, Swiss International Airlines, United Airlines and Virgin Atlantic have adopted the test.

This test was presented to the government for approval to be used in Bahamian airports, however, it has not been given the greenlight. An advertisement appearing in The Tribune on January 7 calls out the minister of tourism for not having the tests at airports and asks him if he has “a better idea”. The advertisement also quotes the Food and Drug Administration (FDA) as saying the rapid antigen tests, currently used in The Bahamas to test travellers in the country for more than five days, fail to detect up to 70 percent of COVID-19 asymptomatic cases.

The government mandates a negative PCR test for entry in The Bahamas, which is a more reliable form of testing.

Mr Wells said: “In general, the government of The Bahamas doesn’t move forward with any form of testing technology, kits or platform that has not been approved by the World Health Organization (WHO). The Ministry of Health is a very conservative body and the Bahamian people need to understand that.

“Even though we have the very best and brightest minds in The Bahamas in this ministry, what this ministry does is basically cover itself in the protection of the WHO and the Pan American Health Organisation (PAHO) in regards to recommendations.

“Rapid antigen tests were out in the market for months before the Ministry of Health (approved) its use and when it did so it only approved two of the tests that were approved by the WHO. The Ministry of Health, when others were saying we should accept the rapid antigen test for travel across borders, recommendation was simply the RT-PCR test would be the only test that the government would recommend as the test requirement for coming into the country.”

Asked if he thought the WHO and PAHO were archaic in their dealings in the health industry when compared to the US Centres for Disease Control (CDC) and the Food and Drug Administration, Minister Wells explained his thoughts on those entities.

He said: “The WHO and PAHO are forward leaning technologically in regards to research, but they are very conservative with recommendations. Because we do not have a regulatory regime in country, we depend on the regulatory regime of the WHO and PAHO to approve platforms, protocols and procedures for us in regards to how we are moving forward with COVID.

He further explained that the CDC basically covers the ambit of the United States and was more the focus for Americans when outgoing President Donald Trump pulled out of WHO, removing the presence and funding of America. Mr Wells is confident that with President-Elect Joseph Biden soon taking the reins, the United States will rejoin WHO and PAHO.

Not making any promises that the RT-LAMP test would be approved, Mr Wells expressed joy in seeing the country’s COVID numbers drop. He attributes this to the excellent work of the country’s health professionals.

They must know what they’re doing. The numbers are declining

Comrade Renward, being the colony's clinics' have failed to deliver on COVID's 5-day testing - why not step aside allow another else to get tourists. and visitors tested? Shakehead a quick once for upyeahvote, Twice for not?

I feel a whole lot better since the information came from the WHO. I can remember when the organization said that this virus was nothing to worry about , in January.

Always the last to do anything smt

Translation: "We only do what the Communist Chinese Party and its agents tell us to do."