Biden Takes The Helm As President: 'Democracy Has Prevailed' 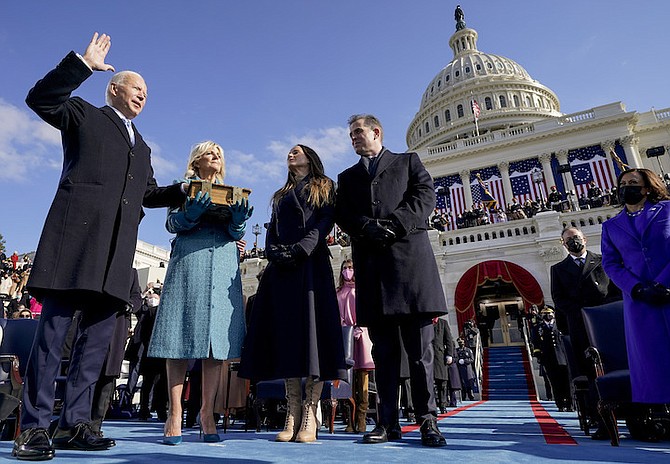 Joe Biden is sworn in as the 46th president of the United States by Chief Justice John Roberts as Jill Biden holds the Bible during the 59th Presidential Inauguration at the U.S. Capitol in Washington, Wednesday – their children Ashley and Hunter watch. Vice President Kamala Harris is pictured right. (AP Photo/Andrew Harnik, Pool)

Biden's inauguration came at a time of national tumult and uncertainty, a ceremony of resilience as the hallowed American democratic rite unfurled at a U.S. Capitol battered by an insurrectionist siege just two weeks ago. The chilly Washington morning was dotted with snow flurries, but the sun emerged just before Biden took the oath of office, the quadrennial ceremony persevering even though it was encircled by security forces evocative of a war zone and devoid of crowds because of the coronavirus pandemic.

Vice President Kamala Harris bumps fists with then President-elect Joe Biden after she was sworn in during the inauguration, Wednesday, at the U.S. Capitol in Washington. (Jonathan Ernst/Pool Photo via AP)

And then he pivoted to challenges ahead, acknowledging the surging virus that has claimed more than 400,000 lives in the United States. Biden looked out over a capital city dotted with empty storefronts that attest to the pandemic's deep economic toll and where summer protests laid bare the nation's renewed reckoning on racial injustice.

"We have much to do in this winter of peril, and significant possibilities: much to repair, much to restore, much to heal, much to build and much to gain," Biden said. "Few people in our nation's history have more challenged, or found a time more challenging or difficult than the time we're in now."

His predecessor's absence underscored the healing that is needed.

Flouting tradition, Donald Trump departed Washington on Wednesday morning ahead of the inauguration rather than accompany his successor to the Capitol. Though three other former presidents — Bill Clinton, George W. Bush and Barack Obama — gathered to watch the ceremonial transfer of power, Trump, awaiting his second impeachment trial, instead flew to Florida after stoking grievance among his supporters with the lie that Biden's win was illegitimate.

Biden, in his third run for the presidency, staked his candidacy less on any distinctive political ideology than on galvanizing a broad coalition of voters around the notion that Trump posed an existential threat to American democracy. Biden did not mention Trump by name in the early moments of his inaugural address but alluded to the rifts his predecessor had helped create.

"I know the forces that divide us are deep and they are real. But I also know they are not new. Our history has been a constant struggle between the American ideal that we all are created equal and the harsh, ugly reality of racism, nativism, fear, demonization that have long torn us apart," Biden said. "This is our historic moment of crisis and challenge, and unity is the path forward and we must meet this moment as the United States of America."

Biden came to office with a well of empathy and resolve born by personal tragedy as well as a depth of experience forged from more than four decades in Washington. At age 78, he was the oldest president inaugurated.

More history was made at his side, as Kamala Harris became the first woman to be vice president. The former U.S. senator from California is also the first Black person and the first person of South Asian descent elected to the vice presidency and will become the highest-ranking woman ever to serve in government.

The two were sworn in during an inauguration ceremony with few parallels in history.

Tens of thousands of troops are on the streets to provide security precisely two weeks after a violent mob of Trump supporters, incited by the Republican president, stormed the Capitol in an attempt to prevent the certification of Biden's victory.

"Here we stand, just days after a riotous mob thought they could use violence to silence the will of the people," Biden said. "To stop the work of our democracy. To drive us from this sacred ground. It did not happen. It will never happen. Not today, not tomorrow. Not ever. Not ever."

The tense atmosphere evoked the 1861 inauguration of Lincoln, who was secretly transported to Washington to avoid assassins on the eve of the Civil War, or Roosevelt's inaugural in 1945, when he opted for a small, secure ceremony at the White House in the waning months of World War II.

The day began with a reach across the aisle after four years of bitter partisan battles under Trump. At Biden's invitation, congressional leaders from both parties bowed their heads in prayer in the socially distanced service just a few blocks from the White House.

Show's over clowns now time to get back to stealing and war. Donald Trump, the first US President in many decades not to start an illegal, murderous War for the profit of a few, thank you for your service.

Um where were you last week when trump started a riot?

Trump didn't start any riot, you didn't listen to his actual speech so you don't know. You only know what the media tells you. Where were you when liberals were burning down America throughout all of 2020? Why are you comparing a war to a riot anyway? Watch how quickly these Democrat criminals startup another war for profit.

Um. "We're here on orders from your boss, president trump". Time for you trumpies to get a grip. Most incompetent, most dishonest, most corrupt, racist, misogynistic, president of all time. And to top it all off a traitor too. You guys are on the wrong side of history. Wake up.

Like I said I'm sure that you did not watch Trump's entire speech for yourself, so really you don't know what you're talking about. You're just repeating what the media framed for you to think. As for the "wrong side of history" that's a complete joke. I'm on the side of Liberty, not Marxism.

By the way according to government stats 93% of BLM protests were peàceful. Just a little FYI for ya...

LOL. First of all that's not a "government" statistic. The BLM riots of 2020 are the costliest, domestic manmade damage to American property in history. It's in the Billions. Many Black people died in the riots, mostly killed by other Blacks. The BLM and Antifa terrorists shot and murdered Secoriea Turner, an 8 year old Black girl, David Dorn and many others while the media suppressed it all as "mostly peaceful". You know nothing.

Sure. Nothing like fox news stats to back up the lies of the day... Lol...

Ignore this Vanguardist, I heard he did not even last one week in Cuba...

Lol. Forget what you wanted to say?

Typical for a Demmy

You're so right proudloud... I couldn't be happier to see Trump gone!!

Trump isn't even qualified to be the President of my neighborhood's homeowners association. And I am registered Republican!!

You a republican? More like a RINO. The republican party is dead without Trump.

Actually the republican party is dead BECAUSE of trump.

yeah right....if Trump didn't run in 2016 it would be "President Hillary" right now. Leave conservative thought to conservatives fella, GOP is dead without Trump, he's the only reason they won and the Socialists will make sure they never win again by making millions of illegals citizens and ensuring there is zero election integrity.

Yes, I'm a registered Republican in one of the highest tax brackets. Trump is not a real Republican. He pretended to be a Republican to get elected. In reality, he doesn't belong to any party but only himself. With that said, I am extremely relieved that he is going to form a new party called the Patriot Party. That way, he can separate himself from the Republican party and we can get back to what the Republican party really represents (which is NOT Trump or his views).

So right Scuba. You're spot on!👍