ALICIA WALLACE: Mr Davis - let’s make sure everyone who needs to has their say in your Big Plan 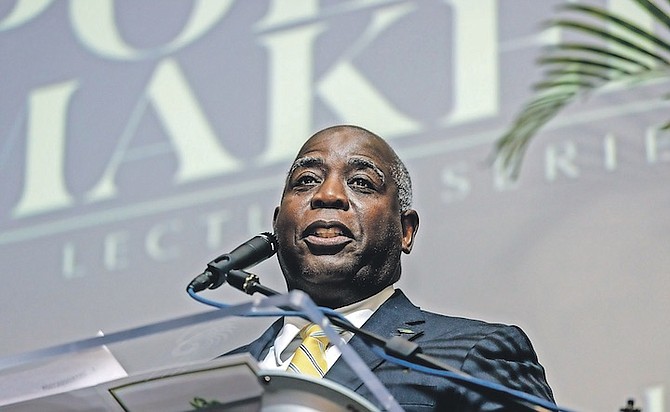 PRIME Minister Philip “Brave” Davis speaking in the Meet The Policy Makers lecture series at the University of The Bahamas. Photo: Austin Fernander

Last week, at an event in the “Meet the Policymakers Lecture Series” hosted by University of The Bahamas’ Government and Public Policy Institute, the Prime Minister presented on the National Development Plan. Following his presentation, there was a short question and answer segment and one question sparked about two days of commentary — not necessarily conversation — about LGBTQI+ people and human rights. 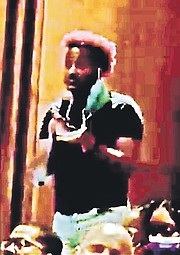 NATINO THOMPSON, in this image from video of the university event.

When I watched the recording, available on the University of The Bahamas Facebook page, I took quite a few notes because I found a number of statements quite interesting, many of them in contradiction to what is in practice, and some of them related to the question that had everyone talking. I am sharing five interesting points that were made, not to agree with or validate them, but to be considered in the context of the question asked.

Davis said, “The National Development Plan for The Bahamas benefitted by having input from Bahamians from each part of the country and every walk of life. The results, therefore, form a consensus of what Bahamians think needs to be done in order to move the country forward.”

While there was consultation to help drive the drafting of the National Development Plan, the result of the process was definitely not consensus. As is obvious from the questions posed, everyone is not on the same page. All views are not incorporated into that plan.

There are some missing elements because of the gaps in the consultation exercise. Of course every single citizen was not included in the process, but what is cause for concern is the exclusion of particular groups. This exclusion may not have been intentional. Comprehensiveness requires significant resources and a strong awareness of and connection to specific groups of people whose realities are different from those considered to be “the average Bahamian.”

The Prime Minister mentioned the National Development Plan is a dynamic document. It is not clear what he meant by that, but it should be expected that such a document would grow and change as we learn more, as we change, and as our environment changes. It is important we do not become so enamoured by working documents we produce that we revere them and treat them as though revision would be an insult rather than a recognition of changing conditions, growth and responsiveness. A dynamic situation is constantly changing, and a dynamic document is not written in stone.

“My earlier point about the dynamic nature of development planning was to hint at more than the evolving needs of our country over the short, medium, and long terms.” Davis said. “The context becomes king in so far as the realities of the day will have great influence on the priorities and perceptions of the time. Whatever those are, it is also to emphasise that the context didn’t come out of nothing.”

What is our reality today? How does or must it influence our priorities?

Davis noted there are different points of view held by different administrations and generations. He acknowledged that the past continues to shape our lives now, and there are still older ways of thinking that persist today. “Are they wrong to do so?” he asked. “Of course not. They are Bahamians, and even if they are not of the view of the majority, they still have influence.”

Does this mean we are to accept regressive views? Do we treat people with new or unfamiliar (to us) ideas, especially about rights and State responsibilities, as Bahamians with valuable contributions?

“We are all too familiar with some working practices in The Bahamas where workers are subjected to all manner of humiliating indignities[…] As an unashamed holder of progressive values, I do not believe the State should stand idly by and leave people to just fend for themselves. At the other extreme, I do not believe that the State is there to do everything. People must and should be able to help themselves.”

The Prime Minister briefly noted the plan is ambitious, both in scope and in depth. He acknowledged this means it is necessary to prioritise.

How have we, historically, prioritised issues and actions? How does that need to change? Which issues and which communities need to be named and involved in decision-making?

“Like former administrations, you often leave out this group of marginalised people. We cannot talk about a National Development Plan without the inclusion of [LGBTQI+] people[…] How are you going to take care of queer Bahamians?”

Some of the issues these people face are addressed in other ways, largely in thematic areas, but their circumstances and the way they dictate the opportunities available to them and challenges they face are not fully considered. Solutions to their specific challenges are not laid out in the Blueprint for Change. The fact of the matter is that we are living different kinds of lives, largely determined by our identities which impacts our ability to access resources and services. It does not help anyone to pretend as though a generalised approach will reach and impact the lives of people in situations of vulnerability.

Davis responded, “When I spoke, I did not speak about female or male, I spoke about Bahamians.” At this point, there was applause. The people at the event were, apparently, pleased to hear the Prime Minister suggest it is sufficient to view Bahamians as one group of people with the same needs.

He continued, “I spoke about Bahamians. And that is the way I view all, and if you notice, if you’re looking for a specific—“ He was then interrupted with the followup comment that homelessness and disabilities are addressed, and LGBTQI+ people should also be named.

Davis responded, “Point is taken and heard.” This seemed like a dismissive response, meant to move on from an uncomfortable topic. A bit later, in response to another question, this time about his suggestion that economic equality is not realistic, Davis said, “In the construct of our reality, [you will have] a janitor, street cleaners[…]” All should have dignity “the joys of humanity and life”.

There is an obvious disconnect here. There are wealthy people, and there are far more people who are economically struggling. Their economic struggles, however, are not confined to one part of their lives. It affects every aspect of life. The amount of money a person has determines where they can live, whether or not they can have electricity, the amount of credit on their phones, where their children go to school, the kind of food they buy, whether or not they have childcare, how they get to and from work, and whether or not they can participate in consultation on a National Development Plan.

By extension, these factors determine whether or not children can attend virtual classes, who is at risk of sexual violence, and whose communities are named and issues addressed in plans meant to guide policymaking and programming for decades.

We can talk generally about Bahamians, especially when we are planning for the next 20 years, when there are Bahamians living in incredibly large houses and paid domestic staff, and there are Bahamians who cannot afford to maintain their own small homes and families because they are not paid enough for their work to care of someone else’s. Issues do not affect us all in the same way, and to suggest that or create policies on that basis is negligent at best.

Fuelled by the question and LGBTQI+ people at that event, people have been asking what LGBTQI+ people want. Many are convinced there is a push for “special rights,” and they are wrong. LGBTQI+ people want their human rights to be recognised, realised, and expanded. Protection from discrimination on the basis of gender and sexuality is critical. This would help move us toward better hiring practices and reduction in wrongful dismissal, obligate health professionals to provide healthcare services without prejudice (and without unnecessary commentary or “advice”).

LGBTQI+ people are entitled to the same human rights as everyone else, but access to those rights is impeded by discrimination and violence. That discrimination has to be addressed and that violence has to be prevented, and we need the government to take action.

We can think about LGBTQI+ people, as well as other people in situations of vulnerability, alongside the five points made by the Prime Minister and listed here.

First, there is no consensus, but including LGBTQI+ people in consultation processes will ensure that specific needs are addressed and solutions are put forward.

Second, given the nature of the document, it is not too late to include specific communities and/or information they share.

Third, the same way that people with older ways of thinking are Bahamians, LGBTQI+ people are Bahamians, and ought to influence where we go as a country and how we get there.

Fourth, if LGBTQI+ people are to be able to improve their circumstances, there must be State support, and protection from violence along with recognition and expansion of rights are a start.

Fifth, in prioritising issues, we must not forget the people who are meant to benefit from the plan and its implementation, must not leave anyone out, and must not cause harm, and this requires us to center those at the highest risk and with the greatest need. If there is a vulnerable, marginalised, or at-risk community you care about, it likely has similar needs, and should not be left to meet them on their own or suffer.

We all deserve to enjoy our human rights. We should all experience the “joy of humanity and life”.

This a long read of nothing hey?