Bahamas to foot the bill for Royal couple’s visit 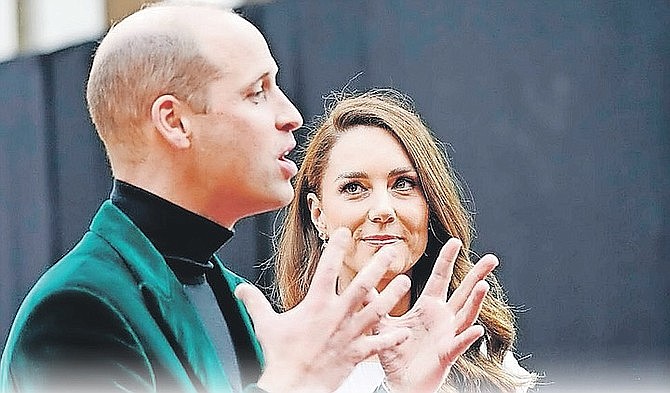 TAXPAYERS will pay fully for the Duke and Duchess of Cambridge’s visit to The Bahamas next week, an official said yesterday.

Jack Thompson, the permanent secretary in the Office of the Governor General, said such trips customarily come at the expense of the host nation.

“It is customary for the host country to absorb the costs, accommodations, meals for the couple and the staff,” he said during a press conference at the Office of the Prime Minister yesterday.

Press Secretary Clint Watson said he sought to find out how much the royal visit will cost, but could not obtain that information.

“They’re still waiting on a number of figures to come in so they don’t have that figure for us,” he said.

This comes after Jamaican news outlets reported last month that Jamaica’s government will not be paying for the royals’ visit there, but would be absorbing some costs.

Prince William and Kate Middleton will visit The Bahamas from March 24-26 to mark the Queen’s Platinum Jubilee celebrations.

Leslie Miller-Brice, the ambassador to CARICOM, said The Bahamas will seize the visit “to showcase the country as more than sun, sand and sea with a key focus on our people, culture, present challenges and a hope for the future.”

She said the royals will see the impact Hurricane Dorian has had by visiting Abaco and engaging residents there about the recovery efforts.

“We want them to appreciate firsthand the impact climate change is having on our country and the need for carbon producing countries to support us,” she said.

The royals will also visit Coral Vita in Grand Bahama which won the Duke’s inaugural Earthshot prize. The prize is awarded to those who support innovative solutions to the climate crisis.

Mrs Miller-Brice said in New Providence, a focus will be on highlighting education loss during the pandemic and on celebrating frontline workers who helped during the COVID-19 pandemic.

Assistant Commissioner of Police Kendal Strachan said residents should expect road closures and diversions as the royals make their way around the islands.

“Security will no doubt be enforced,” he said.

Freeloaders. Not as rabid as Harry and MeAgain, but still freeloaders.

When I hold my bday party the guest will have to bring not only gifts ,bu their own food and drink too.

You have got to be kidding me....poor folks paying for rich folks' party... will it ever change.

Your Megan and Harry comment is just stupid at a minimum. Sista girl got you bigots upset.

Your Megan and Harry comment is even more ridiculous. The colour of her skin is of no relevance at all, the fact that the couple wanted a lifestyle outside of the public eye, but still wanted the British public to pay for it is the issue.

Are we to assume Prince William of the German House of Saxe-Coburg and Gotha, and his wife Kate Middleton, do not know that The Bahamas is in a dire financial predicament with many Bahamians no longer able to make ends meet and living in abject misery? No doubt the cost of their planned visit could be put to so many better uses in a country that now has many of its young children going to bed at night with hunger pangs. William and Kate should keep that somber thought in mind as they go about making their traditional 'for show' rounds smiling and chatting with the most needy in our country. It seems there are no bounds to the cruelty and injustices inflicted by the super wealthy and privileged on the most needy in our world today. Sad.

Perhaps their friends in our wealthiest gated communities will step up to the plate and fund the royally high cost of William and Kate's visit. The wealthier Bahamians who have been bestowed with CBEs, OBEs, MBEs, etc. might wish to chip in along with all of those wealthy QC lawyers. But it probably would not be wise for us much more common and needy folks to hold our breath in anticipation of that happening.

No surprise. Do you all remember when the Queen asked the Poverty Fund for a grant to heat the Palace?

Can you believe this garbage? The Queen wants to throw a party and the broke Bahamas has to pay for it?

I thought slavery was ended but it is still alive and well. The colonial powers stills control us.

And does Watson think the public is stupid? They don't have the cost information ready and he could not get it? Who plans a trip and does not put the costs together for the trip?

How fast the NEW Day ended! (Expected, since a Day after all is only 24 hours)

When The Bahamas was a part of The British Empire ( before Independence) it would be expected for the host country to pay fully for a royal visit. Of course, back then, The Bahamad would be receiving monies from Britain and if the country could make a great enough impression on the Royal visitors, they may get something special like donations toward a school or hospital. That is not the case today and royal visits are very expensive with security detail and protocols. Go the rout of Jamaica and pay only part time f the cost.

Why do governments make certain decisions involving the taxpayers' monies without first consulting their taxpayers, All Royal families that claim this title, if not them ( present ) their forefathers were all rutless and murderous captors who enslaved and tortured millions of people of all denominations to make themselves kings and queens. They should be paying for their own trip, not a problem for us to throw a few bones in the mix. That money could be used for something more positive, their visit is of no importance to the populace. Let them tour through Bain town and innercity so we can see the people's reaction. England itself is split on the importance of its royals and their worth, spending millions just to maintain this image. England owes us monies for the enslavement of our forefathers, they should be bringing us some of that repatriation money with them not the other way around.

Where are the MPs who are to be the voices of the people speaking in their behalf on these issues?

The mp's will be enjoying the party along with their families. Only the VAT paying citizens will not eat at the table , only pay for the party. Total garbage. We are suppos3d to be broke. So, when money is needed , they increase VAT . We need to get rid of the political class or make me a politician so I can get kick backs , land, nive jobs, and let us not forget the women whom are attracted to power.

Fweddy Boy Mitchell no doubt immediately had our government place an order for 20 pounds of Iranian Almas Caviar upon hearing that it's one of Prince William's favourites with a glass of the finest champagne at cocktail parties. Yup, the hierarchy of our corrupt and elitist political ruling class are looking forward to experiencing nothing but the finest over a two-day period of hobnobbing with royalty.

Hey Jack, you forgot to tell us how much this visit will cost the plebes ....... Lord, help the Negroes