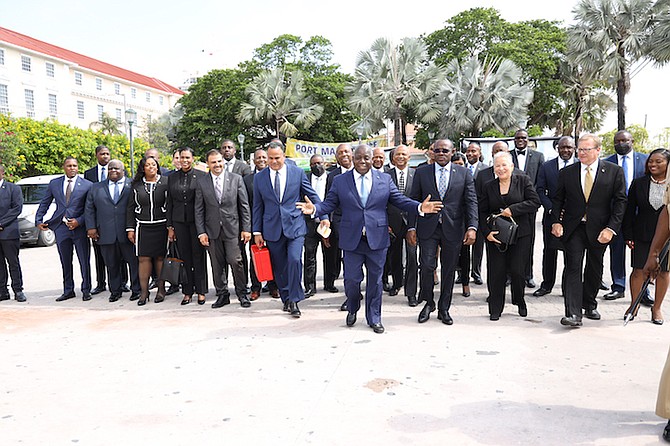 • FNM: What about growth of economy?

This, he said, represented a 19.9 percent increase over the prior fiscal year.

“The current budget projects a significant rebound in the Bahamian economy,” Mr Davis said during his budget contribution in the House of Assembly yesterday.

“Total revenue is projected at $2,804.4bn, a 19.9 percent increase over the prior fiscal year when the economy was in the early stages of an economic rebound from the COVID-19 pandemic. It incorporates many of our revenue enhancing strategies and outcomes such as, increasing real property tax collections and compliance; an improved VAT performance based on the economic rebound; and growth in other fees as a result of improved revenue administration.”

“As a result of these operations which incorporate prudent fiscal management principles, the fiscal deficit under the current budget is estimated at $564.3 m or 4.3 percent of GDP. I wish to remind this Honourable House that this projected outturn does not include potential revenues from asset sales, such as receipts from the sale of the Grand Lucayan Hotel in Grand Bahama.”

Yesterday, Mr Davis also touted the efforts of his administration to pay down on the country’s arrears and unpaid bills it met upon assuming office last year.

He had previously claimed that nearly $1bn in liabilities and unfunded obligations were left behind by the previous Minnis administration.

The prime minister said yesterday: “Madam Speaker: A few short weeks ago, during my mid-term budget contribution, I reported to the House that, upon coming to office, we encountered an estimated $1bn in unsettled claims, unpaid bills and arrears.

“I am now happy to report that, over as many months, we have conducted an extensive exercise to pay down arrears, and reconcile outstanding balances.

“However, we still have a number of inherited arrears which we believe it is important to liquidate. In this regard, we will be seeking Parliamentary approval for a Supplementary Budget for additional recurrent expenditure of $216,928,017 and capital expenditure of $34,491,123.”

“These balances are owed to hardworking women and men, who have given their time, energy and resources, to contribute to the development of this nation, and months later, still haven’t been paid. This harmful practice cannot be allowed to continue,” he said.

He also gave a breakdown of monies owed by the government.

“These outstanding balances include: $56.7m owed on insurance for public servants; $45m in arrears owed to the Water & Sewerage Corporation to settle balances with vendors; $30m for the completion of the Andre Rodgers Baseball Stadium; $19.0m in outstanding payments owed to Doctor’s Hospital for COVID-19 emergency support; $6.4m in outstanding rent payments; $6.0m in outstanding legal claims; and $4m for the restoration and refurbishment of public clinics.”

He continued: “Just as our recently established credit bureau encourages citizens to make timely payments, so too must we in government be timely in paying our bills. In short order, Madam Speaker, we will bring to this House amendments to the Public Financial Management Act that will help to address these challenges. Going forward, the new PFM Act will allow all tax arrears collected to be deposited directly into the Sinking Fund.”

“These funds will be directly earmarked to the settlement of debt, because in many cases we have already borrowed to settle the arrears. This amendment would increase fiscal discipline, as future governments would not be able to rely on arrears to fund current expenditure. Madam Speaker, as a result of operations, the resultant deficit in FY2021/22 is estimated at $756.6m or 6 percent of GDP. This represents a $100m reduction in the projected deficit for the fiscal year.”

Yesterday, Prime Minister Davis tabled two resolutions in the House of Assembly that would authorise the government to borrow $690,702,027 for the next fiscal year once approved.

If the government were a public corporation, it would have been declared insolvent and forced into liquidation.

Oh dear, was there a certain MP missing from the House's benches during premier's tabling of the Budget: ‘We’re Going In Right Direction’ ... who was they self ,,, accompanied by team lawyers spotted heading in a different but still nearby direction to sit on a *custodial bench ― Yes?

@Comradetal, And when dey rest dey hip on said custodial bench to take dey ease, da question will still be "you know who I is??? Yes?

Seems to me that comrade sister "you know who I IS" is like a recalcitrant cat who now realizes she has grabbed a Pitbull by da tail, Yes?

Note Comrade Sheepie, not recalling if was denial that the Comrade Sister didn't said, "You Know Who I IS?"

The corrupt fools at least know our country's finances remain deeply "in the red". Hence their continuing use of the red suit case to carry the budget papers. LOL

How comes government gave full and unqualified reductions on all these items but clothing and shoe store owners/operators must apply for customs exemption on their products and must qualify for their exemption by being up/to-date on all their taxes? This is outright discrimination and many clothing and shoe stores, especially on the family islands don’t even know they qualify for this exemption? Some say because dirty, sneaky Minnis only intended for the chosen few to have this exemption, as was proven by other decisions he made.