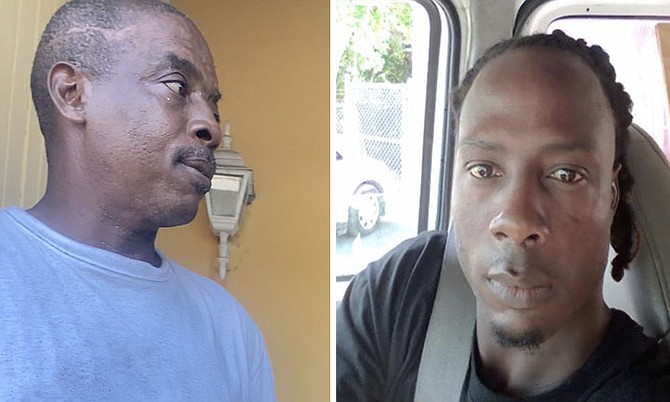 LEFT: Christopher McIntosh speaking to The Tribune yesterday. RIGHT: Larry McIntosh who was fatally shot by police on Sunday.

THE uncle of the 31-year-old assailant who was fatally shot by police on Sunday after he killed a man with an axe, said he feared for his life during his nephew’s rampage noting “either he would have killed me, or I would have killed him”.

Christopher McIntosh told The Tribune yesterday that Larry McIntosh had lived with him his entire life, explaining that his nephew was someone who struggled with mental issues and a drinking problem.

According to police, before 7pm two men were arguing  at Kenilworth Street off Mount Royal Avenue. The aggressor in this matter, while armed with an axe, chopped the victim in his upper body.

Police responded and observed the suspect attempting to chop the man a second time; subsequently, the police fatally shot the suspect.

EMS personnel were summoned to the scene and confirmed that both males had no signs of life.

Mr McIntosh said the night of his nephew, Larry’s rampage, he had taken an axe that he used to shatter the windows outside their home, destroying anything in his path.

Initially Mr McIntosh was listening to the radio inside his home, but he began to hear “banging” sounds echoing in the background.

He then went to check what was happening and found his nephew with an axe in his hand.

“Larry and I met face to face when I opened the front door, he had the hatchet after he already had slashed the windows,” Mr McIntosh told The Tribune.

“I was able to get back inside the house, he got over with the hatchet with full force intentionally to come inside behind me.”

Mr McIntosh said at that moment he locked himself in the house and tried to call the police, not knowing his nephew had killed someone outside.

He said Larry was drinking the night of the incident; he suggested alcohol had a horrible effect on the deceased.

During the interview, Mr McIntosh revealed that the man who was killed by his nephew was actually his nephew’s good friend, which made the incident even more troubling.

“They were friends all their life, so I can’t figure out why that would happen,” he said.

When asked what could have caused Larry to act that way, Mr McIntosh said he had warned the victim about him and his friend disturbing the neighbourhood.

Mr McIntosh said he gave them seven days to get their act together to stop their drinking and bad attitude. However, he believes Larry was offended by that.

Back in 2019, Mr McIntosh said Larry was admitted to Sandilands Rehabilitation Centre as he would sometimes roam the streets naked.

He said after his nephew was released later in 2019, he started to rebuild his life that led to a habit of drinking.

When asked if he felt upset at the police for fatally shooting Larry, Mr Mcintosh responded “the police had to what they had to do.”

Mr McIntosh gave his condolences to the family of the other deceased man; he emphasised that they were close friends who sadly died tragically.

“Everybody trust them two together, they were friends.”

He lamented the fact that both men who once shared a friendship are now dead.

This comes after two men were fatally shot by police in separate incidents last month.

On September 26, police said they shot a wanted suspect dead in Gamble Heights after he allegedly pulled a gun on officers.

Police said they recovered a handgun and ammunition from the deceased.

A few days before that incident, police said a teen allegedly involved in an armed robbery was fatally shot after pulling a gun on officers.

The victim who lost his life to the assailant with the axe was marked as the 103rd murder for the year, according to this newspaper’s records.

Thankfully the police put him down. If they had just arrested him he would be out on bail with an ankle bracelet with a dead battery and drinking and most likely harming other individuals. God puts people and problems in our path so that we can learn. We have learnt that not all humans are meant to have long and meaningful lives.

Same thing is happening in America. People whome need help need to be locked away. How many headlines have we read about a young man or woman stabbing his/her grandmother or grandfather to death in the last three years, in the Bahamas? People with mental issues need to be in a hospital. In America, the same thing is happening. People are afraid to offend other people , and it becomes political.

Many other nutjob vagrants are roaming the street corners everyday begging for change or muttering to themselves, nothing is done about it.