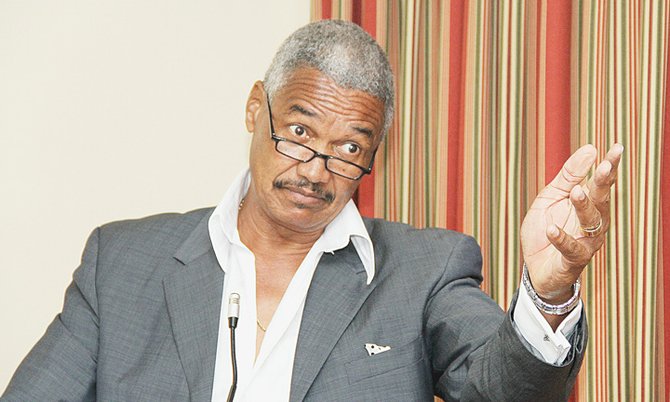 Miller warns that union boss may be suspended without pay

THE Bahamas Electricity Corporation’s (BEC) accounts receivables currently stands at $120 million to-date, its executive chairman yesterday estimating that the utility monopoly would suffer a loss of $20-$22 million for its current financial year.

Lawyer 'a disgrace against this Bar and humanity in this country'

Customers cut off by BEC 'should be fully connected' by September

MOST of the residential customers whose electricity supply was cut due to unpaid BEC bills should be “fully connected” by September, BEC chairman Leslie Miller said.

FORMER BEC minister Phenton Neymour never called a meeting with any of the management or executives of the company, yet is quick to criticise current leaders of the organisation, MP Leslie Miller charged.

BAHAMAS Electricity Corporation chairman Leslie Miller said one of the country’s hotels owes BEC as much as $10 million in unpaid light bills.

Projected BEC loss cut in half to $22m

The Bahamas Electricity Corporation’s (BEC) executive chairman has slashed its projected 2013 financial year loss by over 50 per cent to $22 million, adding that half its disconnected customers owed less than $2,000.

Miller warns of lights out in 'war' with union staff

BEC chairman Leslie Miller yesterday charged he was ready for “war” with the union to exact a new industrial agreement in line with the corporation’s economic reality.

Electric bill down by a quarter?

BAHAMIANS could see as high as a 25 per cent reduction in their electricity bill by the end of the year if new plans by the Bahamas Electricity Corporation come into play, the company’s chairman announced yesterday.

THE Bahamas Electricity Corporation has slashed its monthly average of $1 million in overtime pay by 50 per cent, according to corporation chairman Leslie Miller.