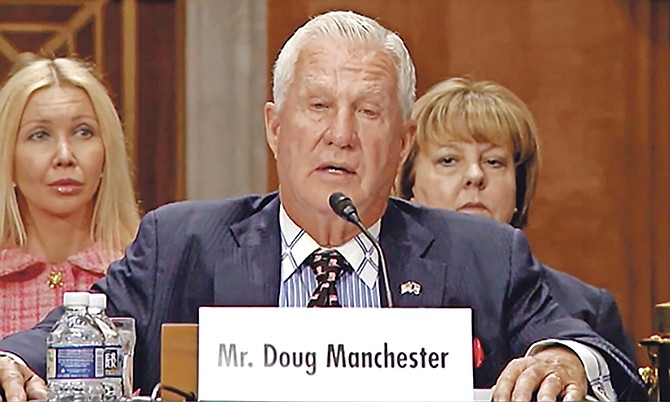 No change in nominee for Bahamas ambassador role

DOUGLAS Manchester, real estate developer and billionaire, is still the nominee to fill the post of United States ambassador to the Bahamas, according to Foreign Affairs Minister Darren Henfield.The government, the minister said yesterday, is also ho

DOUGLAS Manchester, the billionaire and real estate developer who was nominated by US President Donald Trump for the post of Bahamas ambassador, has issued an apology after accusations of having an unsettling management style that allegedly made some female employees uncomfortable.

US ambassador candidate must be renominated by Trump

THE hotelier who was nominated to be United States ambassador to the Bahamas will have to be re-nominated after the US Senate Committee on Foreign Relations sent his submission back to President Donald Trump last week.The re-submission provision come

Henfield plays down comments by US ambassadorial nominee

DESPITE “misstatements” made during his confirmation hearing before a United States Senate committee this week, Foreign Affairs Minister Darren Henfield said yesterday he is still “enthused” by the opportunity to work with the nominee for United Stat

Ambassador pick says future is bright for the Bahamas

THE Trump administration’s pick for United States ambassador to The Bahamas, Doug Manchester, seemed to speak favourably of the newly elected Minnis administration yesterday, telling the panel at his Senate hearing “it really looks bright” in The Bah

‘Bahamas needs US, not China’

THE $2.1bn Chinese fishing proposal for Andros, which placed the former Progressive Liberal Party government in the line of fierce criticism, took centre stage during the United States ambassador to the Bahamas’ confirmation hearing with nominee for the post Doug Manchester saying more US investment is needed in this country.