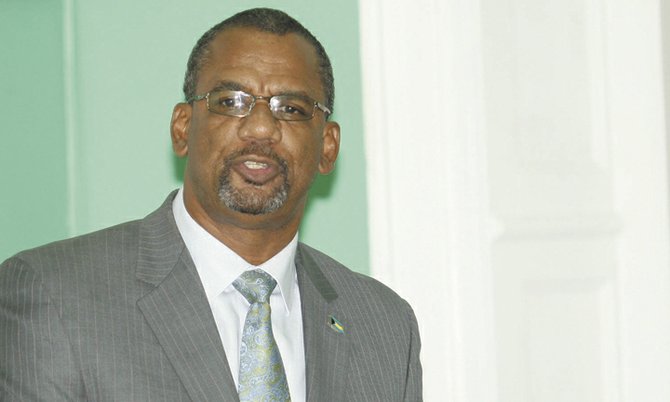 ALTHOUGH Education Minister Jerome Fitzgerald highlighted improvements in numerous BGCSE exam results yesterday, the national mathematics average remained an E while the English language average rose from a D to a D+.

Grade point average (GPA) improvements in BJC results occurred in eight of ten subjects, including mathematics which improved from E+ to D+, the biggest improvement in ten years according to the minister. He presented the statistics during a press conference where he also highlighted several initiatives coming on stream this coming school year to help students who struggle academically.

Although education officials no longer provide an overall national GPA, an official had estimated that last year’s average was a D+. Mr Fitzgerald said he does not believe this year’s GPA changed much from that.

“Just from an oversight we’ve had a lot of improvement,” he said. “When you look at the BJC and you talk about a 20 per cent improvement, I think that’s pretty significant. I think that there has been probably an increase in the GPA there. But overall, I don’t expect we’ll see the sort of change we are looking at overnight.

“I think it’s going to take us a couple years to get there, for us to have the systems and interventions rooted and for us to begin to hold everybody accountable. When I say everybody I’m talking about students, parents, teachers, administrators, administrators within the ministry, the minister. We have to have a system of accountability from top to bottom and so we’re now moving to put that system in place. Over the next couple of years I think we’ll be in a position where we will know who is pulling their weight and who isn’t and be able to make decisions based on that.”

Subjects that showed a decrease in mean letter grade compared to last year include History, Typewriting/Keyboarding and Art and Design.

As for BJC results, only mathematics showed either an improvement or a decline in letter grade.

Starting in the 2014-15 school year, each senior high school will have at least one Student Achievement Officer responsible “for identifying students who are having academic challenges and ensuring that programmes are in place to address the needs of the students,” according to Mr Fitzgerald.

The officers will use BJC results to assess students and introduce intervention measures when necessary in a way that has not been institutionalised in schools before. A students achievement unit will be set up within the ministry to assist with tracking these students and coordinating with officers in various schools.

In addition, evening institutes will be available at all high schools, providing students with access to free lessons after school.

As for efforts to improve mathematics performances, Education Director Lionel Sands said a national high school diploma programme begins next month whereby the math lessons each student receives will be curtailed to meet their individual abilities. “For example,” he said, “those students who are destined for college will be doing high school math for college and those for the work place will be doing work place math and those for apprenticeship training will be doing the kind of math that’s specific to apprenticeship training.

“Once students are placed in those areas they function best so you would see an improvement in the math as opposed to every child doing college math and the child is not a college math person.”

By 'a slight improvement', I think the dear Minister meant to say 'marginally less disgraceful, but still just as terrifying for the future of the country'

Improvement? And we can be proud of these results? Who are we kidding? Our schools are a national disgrace and until education takes priority, this is the mediocity we can aspire to. There will come a time where the job market will open to the world and no longer provide protected status to Bahamians, so our youth will actually have to compete for those jobs with others for whom education was a priority. Wake up, Bahamas!

Why doesn't the government introduce a percentile ranking system based on each school's BJC and BGCSE results ............. both public and private schools and let the chips fall where they may. It is time that these lousy principals who do not push their teachers and students to EXCEL be exposed for what they are. Stop sweeping the reality of the situation under the bushel. Dont just blame the Minister or the Ministry ........... the schools need to shoulder some of the responsibility ................... $250 Million investment each year must be accounted for. In the US........... failing schools are closed down and principals and teachers are fired en masse. DON'T WE LIKE TO COPY THE USA?????????????