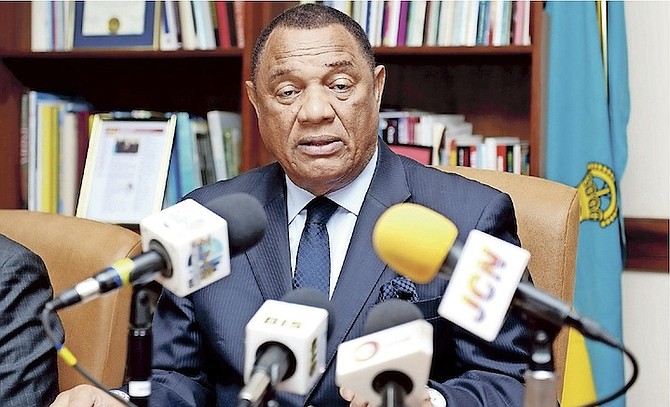 PRIME Minister Perry Christie several times refused questions from reporters on Friday over whether he will fire Education Minister Jerome Fitzgerald or demand his resignation as the Marathon candidate indicated he intended to move on despite his admission on Thursday that he sought contracts worth millions from Baha Mar for his family’s business.

During a reception to celebrate Baha Mar’s ribbon cutting in commemoration of the opening of its first phase, Mr Christie was five times approached by the press with questions regarding his position on the explosive report published in The Tribune on Thursday with leaked emails, which show Mr Fitzgerald advocated on behalf of Bahamas Cargo & Logistics (BCL), a company he said his father formed years ago.

Instead, he dodged reporters who trailed him as he greeted guests gathered in the convention centre. In one instance, Mr Christie told reporters “don’t even try right now", explaining that he had to get his mind right for a speech at the reception.

After the speech, Mr Christie still did not speak regarding the situation despite mounting criticism over his silence on the matter.

As for Mr Fitzgerald, the Marathon incumbent MP told reporters that he has already issued a press statement in response to the claims, adding “it is what it is”.

Asked if he would continue on as a candidate, Mr Fitzgerald said: “At the end of the day I have made my statement and I have been nominated and there is nothing much more to say about that.

"So we will continue to move forward with that. I have said what I had to say. I have sent a press release and that’s it. I am not going to say anything more about that. It is what it is," he said.

“But what I want to talk about is really the fact of how significant this day is for all Bahamians (and) for the employees. This is tremendous for our country. As our Prime Minister said it is very unfortunate that a celebration such as this for our country and our economy that Hubert Minnis is not here today to celebrate with the people.

“If this is the people’s time he really should be here and I think it is a shame and he should be ashamed of himself for not being here to support people in great numbers from his side.

“Obviously he is being small minded in not putting the Bahamian people first," he said.

"It's just a great celebration today. A lot of hard work has gone into today and so we are all very excited about what has transpired here today and so at the very least he could have been man enough, mature enough to come here and celebrate with the Bahamian people at the end of the day.”

On Thursday, Mr Fitzgerald released a statement denying he had any contract with Baha Mar or any of its affiliates.

“Nor do I own any shares in Bahamas Cargo & Logistics, which is a company formed by my father many years ago. Sarkis Izmiralian and I have communicated on any number of matters over the past eight years either in person or by email.

However, some observers have accused Mr Fitzgerald of a breach of the Manual of Cabinet and Ministry Procedure, which states in Clause 40b, a minister must not “solicit or accept any benefit, advantage or promise of future advantage whether for himself, his immediate family or any business concern or trust with which he is associated from persons who are in, or seek to be in, any contractual or special relationship with the government.”

In one of several leaked emails published by The Tribune, Mr Fitzgerald advocated in 2014 on behalf of BCL, writing to Mr Izmirlian: “I would really wish to now establish a relationship between Baha Mar and Bahamas Cargo and Logistics Limited where all ports of entry can be advised that BCL is to collect the paperwork and clear shipments for Baha Mar. It is my hope that the relationship will continue when the hotel opens and we will again be the broker and trucker for this property as we were for so many years.”

At one point, he expressed personal disappointment that Baha Mar’s officials had not come through for him following his requests.

Among the questions raised by the chain of leaked emails is the nature of the relationship between Mr Fitzgerald and Daniel Liu, China Construction America’s (CCA) vice-president. CCA is Baha Mar’s general contractor.

In one email, Mr Fitzgerald referenced “promises” Mr Liu made to him concerning business.

“Unfortunately, despite all efforts by you and promises to me by Daniel Liu that we would receive the brokerage and trucking work, we have not apart from a one time deal to move 40 containers,” Mr Fitzgerald wrote in January, 2014. “I do not know why, I am disappointed but I have accepted it and moved on.”

In his statement yesterday, however, Mr Fitzgerald did not address his contact with Mr Liu and representatives of CCA.

Judging from the way Mr. Izmiralian was treated in this whole matter suggests that because he didn't play ball with the Bahamian politicians, and tried to do business in an honorable fashion, he was thrown under the bus and made to pay dearly. That is sure how it is looking to me. Mr. Izmiralian, for his money, effort, vision and dream to make this a world class resort that every decent Bahamian could be proud of, lost it all. And with that loss came another terrible blow to the integrity of The Bahamas. I am utterly appalled by the tepid response from the PM and the Bahamian people that this type of behaviour is somehow acceptable. It suggests to me that there was an entire culture of this behaviour from our politicians, and just with the BahaMar deal. How can Bahamians hold their heads up with a "leader" such as Jerome Fitzgerald, And Perry Christie, and V. Alfred Gray, and Picewell Forbes, and on and on.........................

My feelings exactly. The PLP is a disgrace. Can you imagine how the rest of the civilized world views us?

There is no need for the PM to fire Fitz. The Bahamian people will fire the whole lot of them on May 10th come hell or high water.

Hubert Minnis did not end this term as leader of opposition in the house and they are all just private citizens now so he was not obligated to attend.

The PLP Government had nothing to do with Izmiralian loosing his project, He did not pay **his loan. He must be having a great laugh at all of you. What about poor Bahamians who lose their homes do you people care about them.??

Birdie, you truly are wearing rose coloured glasses. The reason Mr. Izmirlian could not pay his loan was because the Chinese stopped working and walked off the job after deliberately delaying the openings, and also likely conspired with the PLP to force him out. Now we're starting to see why -- in the shocking (well, not really shocking) e-mails of a sitting MP Jerome Fitzgerald soliciting contracts for himself and his family (against the law, by the way) and I have a feeling we ain't seen nothing yet. Bring on that FOIA and let's see the depths of the corruption and cronyism.

May 10th can't come soon enough. Then we get get about prosecuting and jailing these crooked politicians. We're going to need a bigger prison to hold them all!

birdie, People like you are the reason The Bahamas is stuck in the last century.

we have become immuned to what corruption is because it has been a part of government since as far as anybody can remember.. so what others might call corrupt, we consider as 'thats the way it is'... doesn't say much about us as a people unfortunately. mind you we are not alone, the Americans, Koreans, French, etc., are also corrupt, but at least they enforce penalties when revealed. thats where we are lacking...

There is no integrity on the part of the PM when a member of his cabinet has clearly violated thel law of the land and obviously wants the lions share of available work but is not punished. He is a disgrace as a Minister of Education when caught out publicly lying and setting such a bad example to the teachers and children he lectures to ?

Papa Doc was famous for broadcasting live, executions of those who dared disagree with him. School children would be granted leave in order to witness the festivities.

Might we soon see men clad in tropical print shirts, pork pie hats, and dark glasses prowling the Bahamas, looking for 'enemies of the state', as did Papa Doc's infamous 'Ton Ton Macoutes', aka 'bogeymen'?

These people somehow fooled themselves into believing they were invincible and would be in power forever, regardless of their actions and total disregard for an electorate they considered totally ignorant.

Absolute power obviously does corrupt absolutely. Additionally, it made these "supposed" intelligent people S-T-U-P-I-D enough to believe they could get away with extorting a multi billion dollar project from a developer, and no one would be the wiser.

The chickens are now flocking home to roost and these D-U-M-B pirates have been fresh out of political currency for years.

So, Hubert Minnis did not show up so he is selfish and should be ashamed for not supporting the people, but you tried to extort contracts for your personal gain from this same organization and trying to act like you are some saint for showing up? Boy we can't make these things up!!

Birdie, please go to school, learn how to spell and learn some real truths about the disgusting party that you so fervently support.

Birdie has the anti-truth chip implanted in her head. She also received the PLP truth vaccine that keeps facts and truth out of her system.

the government is running scared. they panicking. Shutting down radio shows And Facebook pages. Hiring their cronies on ZNS to brainwash the nation. They have the irrevalant Gorman Banister of Facebook who can barely draw 100 people to his page (Bahama juice). Then there is Rodney Concur who pretending to be an FNM used his show attack Hubert Minnis and try divide the FNM. Then he accepted a senate appointment from Loretta Butler-Turner, while helping to lead her broadside into a brick wall in attempts to undermine Minnis. But the dirtiest thing this political slime did is, while pretending to be an FNM he encouraged hundreds of potential voters not to register and that they were going to the beach on election day and not vote. Not after registration closes, that low down crook, the great deceiver is seen embracing and endorsing Perry Christie for another 5 years as prime minister, obviously for some secret political prize. But the sins of the this political prostitute does not stop there. After months and months of calling on God to send a tidal wave, not only to wash Bah Mar not only into the sea, but beyond the bar, this hood rat is seen in Bah Mar at its 'opening' toting the people's French bread and white chocolate. May Rodney Concur get his just {PLP} reward for being the great deception.

“Obviously he is being small minded in not putting the Bahamian people first," he said.

So he was not being small minded in putting his family's interest first? Guess only them gattta eat.