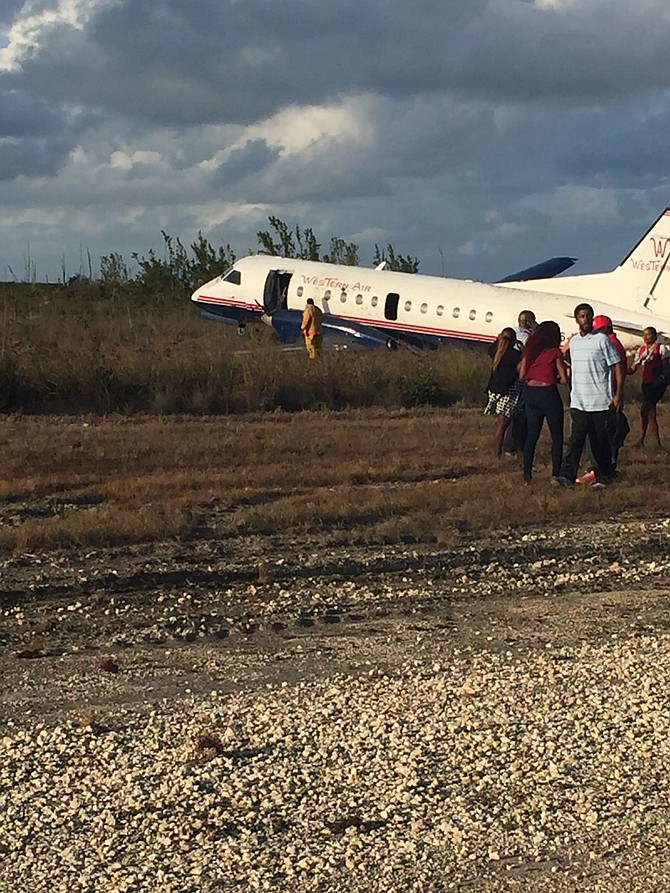 A WESTERN Air plane suffering a landing gear problem made an emergency landing at the Grand Bahama International Airport (GBIA) on Tuesday afternoon.

According to reports, the aircraft, carrying 33 passengers, experienced technical challenges and was forced to make an emergency landing. It skidded off the runway some 200 feet into the bushes.

The incident happened around 5pm, just after the plane had taken off from GBIA on its way to Nassau. The flight originated in Bimini and had made a brief stop in Freeport.

A passenger on board said: "When we take off from Freeport, we had to land back. We had an emergency landing ... we had to land, we ended up through the bush. Now we are on the runway waiting for a ride to come. Fuel leaking from the plane and everything else."

Another passenger told ZNS News that they were first were made aware of the difficulties after the pilot announced that he had to return to GBIA shortly after takeoff.

Onlookers told ZNS News Northern Edition that the plane landed on its side and skidded off the runway at the rear of the airport.

While no one was severely injured, The Tribune was told that two passengers were taken to hospital to receive medical treatment for minor injuries.

A statement from the Air Accident Investigation Department late on Tuesday night said the plane had "experienced problems with its landing gear shortly after takeoff". It was the second incident that day involving a Western Air plane.

The statement, from Delvin Major, Investigator in Charge, said: "On February 7th 2017 at approximately 5:30pm the Air Accident Investigation Department (AAID) of the Ministry of Transport & Aviation was notified about an incident involving Bahamas Operator Western Air Limited that occurred around 5:00pm at Freeport Int’l Airport, Freeport, Grand Bahama.

"Also, around 1:00pm on the 7th February, another SF-340 aircraft operated by Western Air Limited, C6-KID had an engine shutdown on its flight from Freeport to Nassau. There were 20 passengers and 3 crewmembers on the flight at the time. No injuries were reported on that flight. Both incidents are being investigated by the AAID. Further information will be forthcoming when it is available."

Let us see? Tribune reports on Bahamasair.... 1....wheel collapsed (later reported in aviation news that plane written off), 2....engine caught fire on a Miami route,.... 3....prop blade comes off on flight from Exuma.

Glad everyone is safe. Pilot made a good call.

The pilot is paid $18,000 per annum.....that should make us all think long and hard for at least a moment. Obviously this is not an airline willing to spend too much money on required maintenance!

I stopped flying on WesternAir years ago because I had too many concerns, inclusive of matters connected to this point you raised.

Is it just the new age of social media/instant news, or does it seem like more of these issues seem to be occurring in the last few years?

The reality is that the Air Safety Inspectors are not doing their jobs. It may be that they are prevented by lack of funding or equipment (this minister does not have a very enviable record of getting things done) or are overridden (powers that be, ignoring the advice, and still issuing the License) when they do their job.