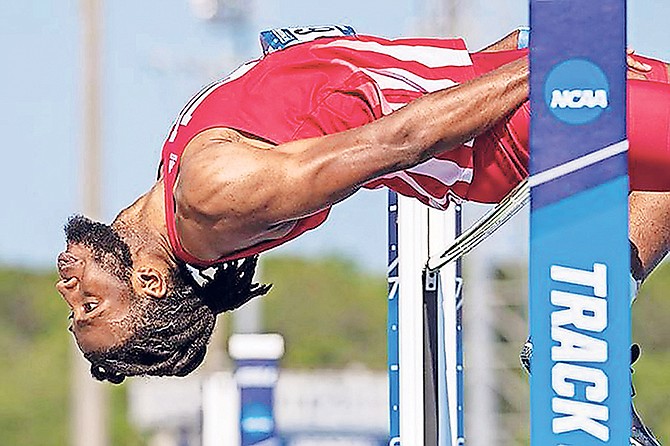 THE men’s high jump, featuring two Bahamians, was the highlight at the Big Ten Conference Championships in Geneva, Ohio, as Jyles Etienne - a junior Indiana University - matched his lifetime best to help Indiana University take the men’s title back to Bloomfield for the second time in four years.

Etienne, now in his junior year, captured his first career high jump victory in a conference championship as he soared 2.23 metres or 7-feet, 3 3/4-inches. Shaun Miller Jr, a freshman at Ohio State, came in seventh with 2.08m (6-9 3/4).

Samson Colebooke, a senior at Purdue University, was fourth in the second 200m final in 20.80. The winning time in his race was 21.11 by Donnie James, a sophomore at Ohio State. The race took place after Colebrooke was sixth in the final of the 60m in 6.75. Waseem Wallace, a junior at Purdue, took the title in 6.58.

In the 200m, Colebrooke had the fastest qualifying time of 20.80. Tavonte, a junior at Ohio State, failed to advance with a third place in his heat for 14th place overall in 21.53.

Colebrooke also teamed up with Jabari Bryant, Waseem Williams and Brian Faust to take their heat of the men’s 4 x 400m relay final in 3:10.92, which turned out to be the fastest of the two heats combined.

Mott also contested the men’s 60m hurdles, but he could only produce a sixth place in his heat in 8.14 for 16th place overall, while in the preliminaries of the 60m, Adrian Curry, a freshmen at Ohio State, was sixth in his heat for 15th overall in 6.88.

Tamar Greene, a junior at Purdue, had double duties in the men’s long and triple jumps.

Colebrooke and Greene helped Purdue, coached by Bahamian Norbert Elliott, to sixth place with 54 points as they trailed the Bahamian connection of Miller Jr, Mott and Curry at Ohio State, who were fifth with 57 points.

On the women’s side, Divine Parker, now in her sophomore year at Ohio State, finished fourth in her 200m final in 23.83. Megan Grabowski, a senior at Indiana, won the race in 24.05.

Earlier in the meet, Parker had to settle for a second-place finish in the 60m in 7.36, trailing her Ohio State junior team-mate Anavia Battle, the champion in 7.29.

Nairn doubles up at SEC

University of Arkansas’ senior Laquan Nairn capped off a weekend of action for Bahamians at the Southeastern Conference Indoor Track and Field Championships by producing a personal best performance for second place in the men’s long jump and a fourth place in the triple jump.

Also competing at the meet were Doneisha Anderson and Megan Moss, who were both entered in the women’s 400m.

In the women’s 4 x 400m relay, Moss led off Kentucky’s team of Abby Steiner, Chloe Abbott and Alexis Holmes as they got second in their heat in 3:30.42 for second overall, while Anderson popped off for Florida as the team of Taylor Manson, Nikki Stephens and Semira Killebrew clocked 3:32.87 for second in their heat for fifth place overall.