Face To Face: Belinda Learned From Her Mother - Standing Up For Others And Making Their Voices Heard 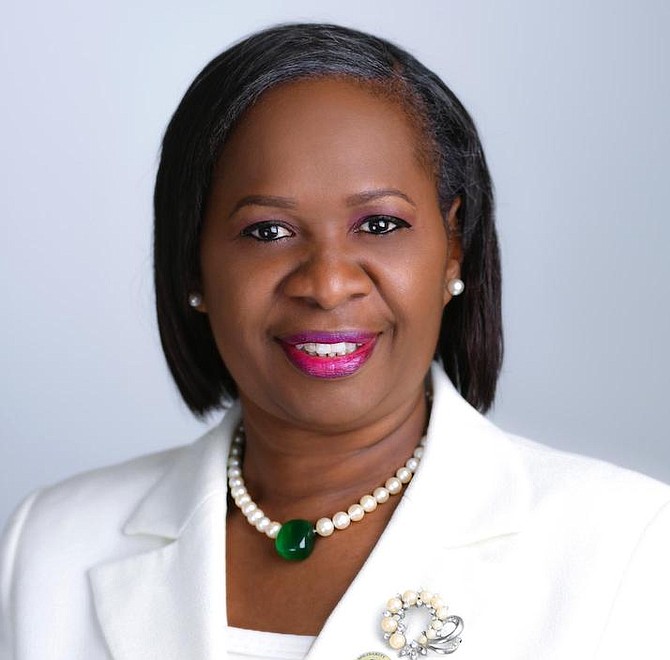 MANY schools, especially public schools in The Bahamas, had their first day of school yesterday. It also happened to be World Teacher’s Day - the 26th annual day honouring teachers globally. This year’s theme was: “Teachers leading in crisis – reimagining the future”.

In the view of a global pandemic, teachers are facing their most difficult time yet. The new school year is quite different from any other year, and schools are having to embrace the digital age like never before. The challenge in The Bahamas is complicated by the fact that at least a hundred teachers are in quarantine at this moment. In spite of it all, Bahamas Union of Teachers (BUT) president Belinda Wilson is confident her members are up to the task, but they will need as much support as possible.

“I reimagine a future in education and teaching where teachers will be respected, honoured, and where our voices will be heard,” Belinda said.

“I reimagine a future where teachers will be seen as the experts and the architects of our educational system. Thirty-two million teachers in 192 countries are celebrating. In this COVID-19 pandemic environment, be strong, be resilient. We will and we can succeed; we will make it. In Bahamas, I want to say to teachers, solidarity… forever!”

Belinda has given her life to the cause of teachers in The Bahamas. She has played an active role in the BUT for the past 26 years, and continues to go strong. She has served as the union’s president since 2008 and she is the longest-serving in this post. She is also BUT’s longest-serving executive officer, and the third woman to serve as president, the first being the renowned educator Mabel Walker who led the union in 1947. Prior to COVID-19, Belinda and her executive team were at the table with the Ministry of Education negotiating the fourth collective bargaining agreement that she has taken part in. She has been co-lead for one and has taken the lead for three. 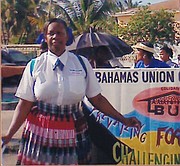 BELINDA in an outfit made up of different student uniforms.

“In 2012, we were able to get medical insurance for our members,” she said.

“Our terms and conditions of service, as well as having a better quality of education for students… these are always on our mind and reflected in our industrial agreement.”

Her monumental journey in the teacher’s union started in 1994. She was teaching physical education at CC Sweeting Junior High (now TA Thompson Junior High) under the great Leonard “Boston Blackie” Miller. Many find it surprising that a woman with a Master’s degree in curriculum and instruction from the University of St Thomas, a Bachelor’s degree in English Language from St Augustine’s University in Raleigh, North Carolina, trained to teach English Language and Literature at the College of The Bahamas, would choose to teach physical education.

Belinda replied: “Why? Because it is an easy fit for me. I spent three months teaching English Language and Literature when I went to the Ministry of Education to request a transfer to teach physical education. I felt closed in. It didn’t suit me. I like to move; I am upbeat and active.”

She showed athletic prowess from a young girl. Born on Ross Corner, this Farm Road girl is the ninth of 11 children born to Reverend Basil and Maria Johnson. She attended Woodcock Primary before attending St John’s College for high school. 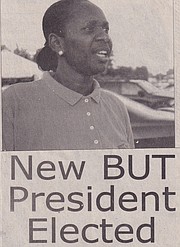 BELINDA on being elected BUT president.

Principal Arlene Nash Ferguson once held a competition at the school, which Belinda won. She is to thank for the name “The Green Giants” that students shout at competitions today. While at St John’s, Belinda not only excelled in academics, but also at athletics. She made records at the school in track events like the 400 and 800 metres, and long jump. She participated in numerous sports, including softball.

It was May of 1994 and Belinda was about to graduate. Her boyfriend, Arnold Wilson, had flown over to the graduation, but he also intended to propose. Unfortunately, Arnold lost the ring! Bewildered by the event, he ended up telling his love what had happened, and they went back to the mall where he thought he had dropped it. Lo and behold, the ring was still on the floor of the shop where he dropped it. It was carefully wrapped in a napkin. The fact that the napkin was still on the floor in the spot he dropped it was a sign to the couple that they “were meant to be together”. Twenty-six years later, they are still in love and going strong with a beautiful daughter, Nika, Belinda says. They got married at 11am on May 7, 1994 and at 12 noon, Belinda was walking across the stage in her cap and gown. 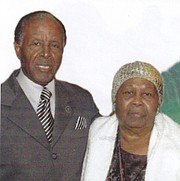 BELINDA’s parents, Rev Basil and Maria Johnson. Her mother died in November last year at the age of 90, and her father is still alive at 91 years old.

That same year, she started at CC Sweeting Junior and was elected a shop steward for her counterparts at the school. She taught there for five years before moving on to CV Bethel Senior High, and she was one of the pioneering teachers who were among the first to work at the new school. By 2003, Belinda went on to assist in the opening of another new school – Dame Doris Johnson Senior High. She became the first Teacher of the Year for the school, and also received the Excel award for Coach of the Year.

She credits her first go at teaching to Bishop Neil Ellis, who made contact with the late great Rev Charles Saunders, requesting an opportunity for her to work at what was then the Bahamas Baptist College, now named after Rev Saunders. She says her first students are now 48 and 49-years-old, making great contributions to the country, which gives her great joy and pride. She and her family continue to attend Mount Tabor Church under Bishop Ellis to this day.

Her strong faith, she said, was nurtured by her parents: “I thank my parents for teaching us the way of the Lord. My dad woke us up at 5am to pray every day. We went to church and Sunday school. On December 31, 1989 I accepted the Lord and I am a true believer. My husband is also a quiet, but prayerful man. He provided a safe, comfortable, loving home and whenever I have a rough day, I can go home to the loving arms of my husband. He is my rock and a pillar of strength. My daughter is quiet like him, but very observant. My siblings and some of my cousins and close friends have also been a pillar of strength for me in my life.”

Her mother also made a tremendous impact on her, as she learned to be an activist under her wings: “I must have followed in my mom’s footsteps. We spent a lot of time with her at the Bahamas Hotel Catering and Allied Workers Union. She was a chief shop steward for 18 consecutive years there. We were on the ground with her when they demonstrated, and we watched her take a stand for others.”

Belinda - who was a shop steward from 1994-1996 and a trustee from 1996-1999, found it necessary to take that same type of stand for others when she attended a union meeting back in 2004: “I never wanted to be president; I never even thought about it. But I attended a certain meeting and holy hell, as they say, came up in me. I saw what was happening in that meeting and I thought the teachers deserved better representation. I decided to seek out certain individuals and convince them to run with me for the new executive team. Among them was Ida Turnquest. She was to run for the president position and I would run for secretary general. She said yes. We ran with a small team, but our team was successful.”

During the following BUT elections in 2008, Ida decided that she did not want to run, so Belinda made the decision to run for the post. Later on, Ida had changed her mind. So she ended up running against Belinda along with Francis Friend and Byron Small for the position of president. Belinda won. She has been at the helm ever since. She considers herself in good company, as the BUT has had some outstanding persons in leadership, including Carlton Francis and former Governor General Dame Ivy Dumont, who was the union’s first secretary general. The union has a rich legacy and on January 10, 2018, a document was produced in this regard. It is a booklet commemorating the oral history of the BUT, written and edited by Patricia Roker and designed by Sheila Bethell.

Belinda has the honour of having the BUT’s multi-purpose building in Grand Bahama named in her honour – the Belinda Wilson Convention Center. Two executive committees voted on and approved the name. It commemorates a woman who continues to be at the forefront of the fight for the rights of teachers. In addition, hundreds of teachers have benefitted from local and international training under her leadership. Union members benefit from Christmas bonuses, and they also have retirement and death benefits.

“I am very proud to be representing the teachers of this nation,” she said, “It is the profession of professions.”

“It is an honour and privilege for me to serve them for such a long time. I have made so many friends and I have so many relationships with colleagues and associates that will last a lifetime. I enjoy life and I have a passion for what I do. There is something inside of me… I get very upset when I watch people being taken advantage of and when people are treated unfairly. It causes me to want to push and advocate even more for the rights not only of teachers, but people in general. I intend to serve my country and be a voice for the voiceless without fear or favour as long as I have breath.”

There were some highs and lows in Belinda’s tenure. Among them, she was suspended several times by executive committee. In 2017, she went to the Supreme Court to plead for her place on the ballot. The court ruled in her favour, and she won her way back to the presidency by more than 1400 votes.

“I have learned that you have people who for and those who are against you. After running and being successful seven times, I realise there’s more with me than against me. I am honoured to have served the teachers for so many years and we are still going strong!

The acronym “BUT” was clearly created as a joke and to disrespect the members. It could just as easily have been BTU.

The first thing they should do is fix this.

Why should anyone ever be addressed as “BUT President”.

What a disgrace to our nation.

Belinda has her way as all face to face schooling in New Providence and Abaco has been cancelled. On a side note one distraught parent said at this stage, teach the children Maths and English and after that they will learn everything else they need to know.’

The BUT talks big and yes has given us medical and pay rises but as for fighting for indiviual cases of victimization,wrongful dismissal etc maybe Belinda could put as much effort into that as her personal fight to be reinstated