Tureano: ‘I’M Going To Expose His Weaknesses’ On Fight Night 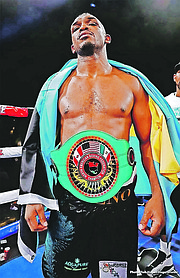 One week away from fight night, Tureano Johnson and Jaime Munguia have different motivations headed into their bout, but both look to ascend the rankings in the middleweight division.

Johnson, the older fighter by 13 years, said the age disparity will be a non-factor once they step into the ring.

“Do not be dismayed. Go back and watch my fight with Jason Quigley and you will see my intensity be 10 times that on fight night.

“This kid I’m going up against is a world champion who is very talented and strong. He has youth on his side but come October 30th, I’m going to expose his weaknesses and show the world that Tureano Johnson has championship pedigree and not his opponent,” Johnson told NY Fights.

“Whether I’m old or young, it will not bring any pressure either way for me. Without a doubt, I’m going to win this fight. Is it make it or break it? Nah, I’m 36 now but next year I’ll turn 34. You guys are getting older as I’m just getting younger. I love the way I live. I live a reserved lifestyle with my wife and daughter.”

Johnson and Munguia are scheduled to square off on October 30 at the Fantasy Springs Resort Casino in Indio, California. The fight will stream live on DAZN.

Munguia, 23, is undefeated (35-0, 28 KOs) and the former light middleweight champion has just one middleweight bout on his record thus far - an 11th round knockout over Gary “Spike” O’Sullivan last January.

Johnson, 36, (21-2-1, 15 KOs), is coming off a victory over the previously undefeated Jason Quigley on July 18 for the NABF middleweight title, also at Fantasy Springs.

Both Johnson and Munguia fight under Golden Boy Promotions.

Johnson dismissed the notion of being a “gatekeeper” to the middleweight division - a résumé builder and stepping stone for Munguia. “I am a boxer and a boxing fan. I watch how the market in boxing develops and Munguia really had no other choice. If he would have chosen anyone else, it would have been outside of Golden Boy Promotions (GBP).

“I think this is the best choice GBP could have made and a smart move. You have two very good fighters and one whom they claim is a gatekeeper. It’s sad that they label fighters like myself a gatekeeper, but I will go with what they give me. When I get in the ring, they will say different,” Johnson said. “Was I surprised this fight is taking place, not really because I called him out. I told GBP, if you think the kid is that good, then let’s see him swim with a real shark. I’m a true middleweight. Spike O’Sullivan wasn’t a true middleweight.”

Just after his win over Quigley, Johnson was ranked No.8 in the World Boxing Council and No.15 in the International Boxing Federation.

“We are on the strongest part of training, we are being responsible by training very hard every day, we have the ability to walk away with our hand raised but he is a tough opponent,” Munguia told FightHype.com. I’ll go in there to pressure him and look for the knockout. We had a very complete camp and on October 30 we will demonstrate all of it.”

Munguia also had a different outlook on his lone middleweight win over Sullivan.

“At 160 pounds I feel a little stronger, I think that is going to be the big difference. With O’Sullivan it was my first fight in this division, I didn’t know what it felt like, but right now I think I’ve gotten on well, I know what it feels like, I have a little more confidence, we have continued to work hard, it will be great fight,” Munguia said.

“I think it will serve me, because I had been very active as a champion. I made four defences every year and it is somewhat exhausting; this helped us to rest and we have never stopped training.”

“Yes, it makes a lot of sense,” Munguia said to Fighthype when asked if he wants to fight Gennadiy Golovkin in 2021. “It would be a great opportunity for me. We decided amongst ourselves that we’re ready to take that risk.”