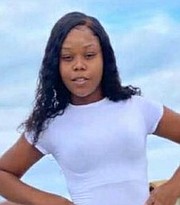 AN 18-year-old woman was shot and killed at her home in Abaco on Sunday afternoon in an incident that also left her younger brother in hospital.

While the victim’s identity was not released by police, close friends and relatives have identified her as 18-year-old Jilny Flereume, a Bahamian of Haitian descent.

She is one of five people to be killed so far this year and was fatally wounded in the Farm Road shanty town in Treasure Cay, Abaco.

Police said shortly after 1pm, officers were called to a home in the community where they discovered a woman with apparent gunshot injuries to her head.

Police added a male also received gunshot wounds to the body during yesterday’s incident and listed him in serious condition.

The Tribune understands that the victim is Jilney’s younger brother, aged 13. A man has since been arrested in connection to the incident.

Police said: “Officers upon making further enquiries and following a significant lead, arrested a male suspect in the Murphy Town area, who is known to the victim. Officers upon searching the male also recovered a .9mm Smith and Wesson pistol with 38 rounds of ammunition.”

According to well-placed sources, the killer is suspected to be the boyfriend of one of Flereume’s female relatives. Sources also said the incident came after an argument reportedly ensued between Flereume’s relative and her boyfriend.

However, no details were provided by police.

In an interview with The Tribune yesterday, Alexis Denoye, a long time friend of the deceased teen, described her as a quiet spirit.

“She was quiet, she didn’t say much but when you got to know her she was very funny,” Ms Denoye said. “She just recently graduated from high school last year, Sherlin C Bootle. I’ve been friends with her since they moved into the neighbourhood five years ago and from then, I used to be by their house every day until after the storm when I moved back into Marsh Harbour….l m still in shock over the news.”

News of Flereume’s untimely death also elicited a reaction from Bahamians on social media, with many calling for an end to gun violence against women.

Non-profit organisation Families of All Murder Victims (FOAM) said: “This madness has to stop. Women are treasures God put on this earth. Condolences and prayers are offered to the family and friends.”

Sunday’s killing follows the murder of a Stapledon School physical education teacher, who was found dead in one of the classrooms on Friday, becoming the nation’s first murder victim for 2021. Three men were found dead after separate incidents on Sunday and Monday.

It marks the first homicide for the Abaco community for the year. It also comes days after a single mother of seven was found dead following a suspected domestic dispute on the island.

According to a relative, Angeleta Pritchard, who had just turned 36 on Christmas Day, was beaten to death in front of her four-month-old child at her home on Boxing Day.

At last report from police, a man was in police custody, assisting with the investigation.

Whilst Five+1-evil subsidies Hurricanes, crimes, suicides, and SARS-CoV-2 compete for different degrees of their harmful impact brungs to we out islands, cays, and rocks the colony's ruling 35-House-elected redcoats member *Directorate. has been more focused for whom's chest to be decorated with yet another English colonial award.
There is also +1 a direct correlation to the unfortunate deaths of that left go medically untreated. Shakehead a quick once for upyeahvote, a slow twice for not?

They do as they wish on the lawless island of Abaco. Becoming like the Capital in a slightly different way due to the HUGE migrant population. Crime goes unchecked left, right and centre, as it long has, only now much more pronounced. This Government is useless and the next will only be worse.....

Bringing the "Over The Hill" to the Family Islands.

The whole judiciary branch needs a complete cleansing of political appointees. As a matter of fact, the entire legislative branch needs to be cleansed as well.

I want to see how the Department of Works treats Bahamians who build without work permits on property that they do not own. Good on the Androsians who decided to squat; if the Haitians can live here without paying for land, why should Bahamians?

That's a very strange statement. But that aside, we have problems that locking up people in their houses for 6 months non stop so the murder numbers look pretty will not cover up. Condolences to the family, noone's ever prepared to lose a loved one, this young must be a double blow

Seems like while Marvin Dames is at a church service bragging how some crimes are down by 70%, the spirit and crime of murder is hitting the country harder than Corona. Definitely more deaths from murder since November than deaths from Corona. And what is sad is Marvin Dames is being disingenuous. He knows that most of the reductions in crimes is due from the curfews and lockdowns. And yes, the police presence lately on major thoroughfares and hotspots IS effective and IS producing results, Dames seem to have brought nothing new to his artillery to deal with these murders that seem to be a result of gang warfare and retaliation. ALL the tools , including drones, shot spotters, and cameras seem to be response to murder, rather than murder prevention measures. The gangs need to be infiltrated and dismantled. They are a threat to society and even to the economy of this country. Their leaders who continue to lead young men down this path of destruction and almost certain deaths need to be disarmed and taken off the streets. And word on the streets is that some of these newly emerged gang leaders are in their early 20’s. With barely a high school education and with no clue of the damage they are doing to this country. But The Bahamas is not alone in this new surge in crime, murder included. Several cities, even in the USA have seen their murder rate more than double since the corona pandemic. People have gained an insensitivity to death or causing it.

Crime rose unevenly when stay-at-home orders lifted. The racial disparity is the widest in years. The Washington Post

Should the police form a task force or special unit to deal specifically with gangs and gang activity. Especially murder? It has been out of control for over a decade now and the homicide records reflect it.

What are the people at the new NIA doing? I would have thought doing intelligence on how these guns are ending up in the country and in the hands of these G-average individuals, whose only rationale for dealing with disagreements is to pick up a gun and kill someone, was a priority and a matter of the National Intelligence Agency.

... so basically as the pandemic comes to an end, we are getting back to normal, shanty towns and all!

Proudly biased (and misogynistic). A woman is dead but all we can think about is shanty towns. Why does PROUD HAITIAN ‘Princess’ have to put up with such bigots? Live amongst them, give them money (that part always forgotten - this peanut ain’t nothing we want YOUR riches) in exchange for disrespect?

Explains why tourists and the rich have been going to private islands (not people any decent person would want to know). I have many wonderful memories of the old school Haitians who I called friends and family (they weren’t entitled and showed no thirst for wealth).

Also explains why I can get swindled and not one person can show integrity..