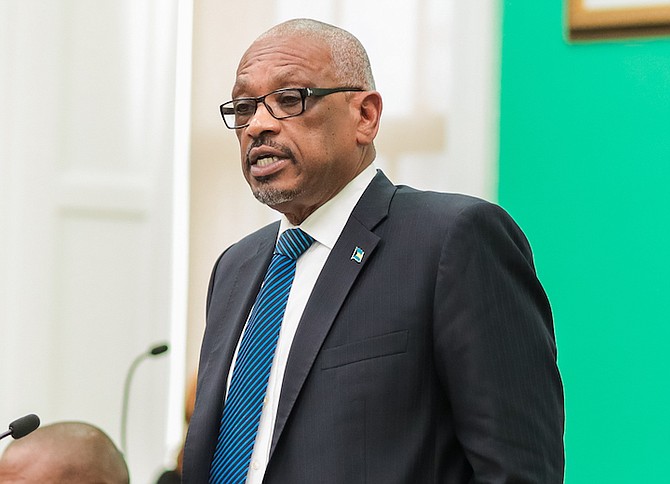 “It’s a stupid and immature statement, an irresponsible statement to be made by any Prime Minister and I can’t wait to get in Parliament to buss his a-- and their a-- for talking stupidness,” Dr Minnis said yesterday.

On Wednesday, Mr Davis said an NGO attached to the Minnis administration’s national food programme had close to $2m sitting in its bank account that was not used to help Bahamians. He said the money has since been returned to the government as demanded by his administration.

However, Dr Minnis said the matter was a result of a quoting error that the NGO was working to resolve.

“The monies were subsequently returned to government, but you know and I know that the hardest thing in the world to do is to return monies to government. Davis and his government need to be very careful when they are trying to impugn the reputation of the NGOs who have done so much for this country. He should not be playing political mischief when the integrity of the disbursement of the monies was preserved. Not one red cent was mismanaged by the NGOs,” Dr Minnis said.

Mr Davis said a review of the food programme under his predecessor is ongoing. He said record keeping with the programme was poor and claimed public officers in the Ministry of Social Services who created the food programme were isolated from the operations of the initiative.

Dr Minnis said: “The Davis administration will force NGOs in the future not to become involved in doing the good work that they are doing with government and not to become involved in assisting government because of political mischief and the impugning of their reputation. They must be very, very careful because should another disaster happen in The Bahamas, because of what the PLP government is attempting to do and lest the NGOs come forth and private sector come forth to assist, the Bahamas would be in serious problems.”

Susan Larson, who headed the feeding programme, voiced similar fears to Tribune Business on Wednesday. She said participants in the programme may be “unnecessarily damaged” by Mr Davis’ continuing attacks on its work.

“I think that you will find each of the NGOs that participated in the task force stands by their record and their service to the Bahamian people,” Mrs Larson said.

“The funds that the Prime Minister is referring to were miscoded, and not misappropriated, so they were not holding on to these funds as if they knew they had them and refused to spend them. This was an accounting error which, when discovered, the funds were put into escrow and the NGO awaited instructions on returning them to the Public Treasury.

“If you know how account numbers are applied to monies going in and going out, it was miscoded and not tallied in accounts attached to the task force. It was not spent, it was not tallied. As soon as the error was realised it was held in escrow and immediate steps were taken to return it to the Public Treasury,” she said.

The Minnis administration created the National Food Distribution Task Force, a public/private partnership, in 2020 to provide emergency food assistance for vulnerable Bahamians and residents affected by the COVID-19 pandemic.

The programme has since come to an end.

The wealthier side of the Holowesko family were big financial-backers of tyrant Minnis and the failed FNM party. Small wonder Davis has put the food programme managed by Susan Larson (maiden name Holowesko) under his spot light.

And the way Minnis speaks is the same way he treated the Bahamian people. What a dense megalomaniac idiot he is!

So as a response to Minnis' rebuttal that clears the clear political slander by PM Davis, you allude that there is issues there. Okay, but do you acknowledge the first matter being clearly resolved with purportedly all the correct steps taken? Davis made vague claims and Minnis provided references to controls and documentation.

I don't see how it's megalomania to be outraged especially when you have and they have the hard flipping evidence. In fact, it's a norm for people to be outraged when they know and can disprove a dangerous claim about their actions.

Minnis erred in several ways, but to include this as one of them is a big disingenuous and will cloud any future claims as being similarly lacking in substance.

Where is the evidence to disprove the claim. The facts are that the money was in their possession, in their bank account and under their control and additional funds were apparently requested. The money was not returned until after the change of government. This begs the question of what would have happened if the government did not change. Misquoted and mis-coded are not accounting terms, and in fact the explanations of former PM and Susan Larson appear to be contradictory.

Sadly all that is happening here is that next time Govt puts out a call for assistance, all those volunteers and donors will tell them to go stuff it. Remember the vast majority of the people on the ground doing the hard work were volunteering their time. Shameful.

Can we please stop with the finger pointing and get some actual work done here?

All this is just more crap to distract the people from the obvious issue here. This new government, like all the others before it, has no clear plan on how to get the country out of this predicament/recession.

When the Roman Empire was on it's last legs as well, they decided to distract the people with games at the Coliseum. Meanwhile, the empire is dying. HELLO! WAKE UP PEOPLE!!!

We need to stay focused on rebuilding the country! Show us the plan forward or get the hell out of the way, so that someone else can take the reins who know what the hell they are actually doing!

What I thought was unusual is the PM never referenced names of the NGO's, or that I heard. It was Holowesko that dropped the names. It would have been better for all NGO's for her to remain quiet maybe. I have a difficult time understanding how $2M of tax payer funds could be sitting in a personal account due to an accounting error...and this person's account does not normally hold that kind of funds. Despite returning the funds this has signs of kiting..which means was the interest also returned?
Minnis has a reputation of corruption and is disliked by PLP and FNMs so he needs to just stay quiet as well. He turned a blind eye to much was happening and it will be interesting to see what else arises? My guess BPL was another slush fund.... This whole thing is unfortunate as many of the NGO's did an amazing job under tough circumstances. The FNM Government should not have exposed NGO's to this and had better payment strategy and policy's in place to begin with.

Right out of the gate I looked with "cock-eyed" jundice at Davis statement. . .then Doc "opene he mouth" and POW!! THEM PEOPLES DEM HAD 2MILLION SITTING ON THEY BANK ACCOUNT. . .BY MISTAKE??? Nigus please. . .ha the hell whole 2 million got sent out from taxpayers them money to some other people dem bank account?? Chile. . .the more them FNMs dem try to "spleen" theyself. . .the more nanny they step in!!

I don't like what I heard. . .that kind of "mistake" just don't happen in any "non-tiefin" government anywhere!!

Is this the PM that went on the world stage and call us corrupt and thieves. Now the tables are turned on his massa he want fight. Typical dumb Ni#@a.

The Bahamas will rue the day they elected this mindless spineless Davis, Chester and co to run this country

Davis is nothing but a propped up puppet and therefore not really the one who is running our country today. Our nation's most Incompetent Ruling Authority is now His Excellency Sebas Bastian who soon expects to be coronated King of The Bahamas. LMAO

Any wonder ever since heaven installed its new caller ID back at the beginning of January, Pastors from across UK Colony have been inundated with complaints by church members over the number of dropped, misdirected, incomplete calls with even many being hung up on.
It's like, can't wait for Jesus to buss a-- and their a-- for talking stupidness prayer request calls from 242 area code are becoming more dropped.
Comrades, youse just can't make this degree grown adult man's, talkin foolish plans bully another man's up and from duh floor of House stupidness, and get this, do it in full view duh cameras, but shouldn't comes much surprise, cause didn't he pull off duh fake Oban signatory caper** under duh cameras, ― Yes?

Mr: Minnis is always talking about breaking parts of the body. He is a very foolish man but he is FNM.

His brother should be kept away from the House assembly just in case they decide to start a fight.

something is wrong with this 2 million dollars story. I suppose it depends on your hue. How soon did they discover this so call mistake and when was it corrected??

It was doc who said the Bahamas is corrupt. he must know.

Political mischief doc ?? what did you call it when Frank Smith and Shane Gibson were paraded in hang cuffs and even when the Supreme Court ruled. You and your crew took it to the privy council

Did Frank Smith and Shane Gibson matter or they do not count.??

Keep going Comrade Birdie, not time you be holding back on what remains a popoulaces half known about media characterizations of two man's who appeared on a Good Friday at front door Mr. Minnis, bearing gifts of fishes said at time were for Good Friday ceremonial stewing purpose, ― Yes?

The CEOs of most non profit organizations are paid on the $150,000.00/year range. Check international Cross paycheck.