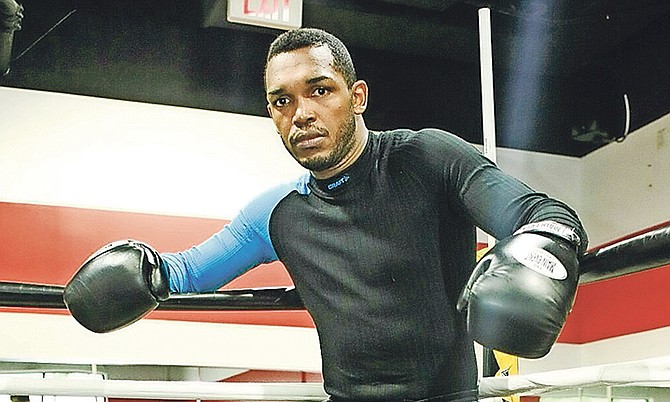 After weeks of speculation, Tureano “Reno” Johnson got the fight he lobbied for on his journey to the top of the middleweight division. Johnson will take on former WBO super welterweight champion Jaime Munguia at the Fantasy Springs Resort Casino in Indio, California, on October 30.

AFTER taking a short break here at home and witnessing the effects of Hurricane Dorian, which has hampered his local sponsorship, Tureano ‘Reno’ Johnson said he’s refuelled and ready to return to the ring.Golden Boy Promotions, Johnson’s promotional

WBA eliminator: Johnson to square off with Madiev

TUREANO Johnson is set to get back in the ring in short order and compete in the WBA eliminator for the middleweight title. According to Golden Boy Promotions officials, Johnson (21-2-1, 14 KOs) is scheduled to face Magomed Madiev (13-0-1, 4 KOs) wi

SINCE his return home after winning the North American Boxing Federation (NABF) middleweight title last month, Tureano ‘Reno’ Johnson has been enjoying his stardom with the Bahamian people. He attended service at United Faith Ministries on Fire Trai

An overwhelming performance from Tureano Johnson earned the Bahamian pro boxer the NABF Middleweight title as he regained his status among the elites in the division.

Just hours away from what he considers a career-defining fight, Tureano Johnson is primed to claim the North American Boxing Federation middleweight title.

Johnson: 'I feel far better conditioned for this fight'

BAHAMIAN middleweight boxer Tureano Johnson promises a much better showing this time around when he steps back into the ring.During a pre-fight promotion for his July 18 matchup against Ireland’s Jacob Quigley for the North American Boxing Federation

'Reno' to square off with Irishman July 18

BAHAMIAN pro boxer Tureano Johnson will step back into the ring in less than a month with an opportunity to regain a spot in the win column and claim a title in the process. Johnson will challenge Jason Quigley of Ireland for the North American Boxi

Johnson to square off with Lemieux this Saturday

Bahamian pro boxer Tureano Johnson is expected to step back into the ring for the first time in just over 15 months.

‘It was a great learning experience for me’

IT didn’t turn out the way Tureano ‘Reno’ Johnson anticipated, but he felt he gave it his all against Sergiy ‘The Technician’ Derevyanchenko in the International Boxing Federation’s middleweight elimination bout.

'Reno' Johnson has fists set on 'The Technician'

For the second time in his career, Tureano ‘Reno’ Johnson finds himself on the threshold of securing a world title shot.Johnson, 33, is in Miami, Oklahoma preparing for his 12-round main event showdown on Friday night at the Buffalo Run Casino in Mia