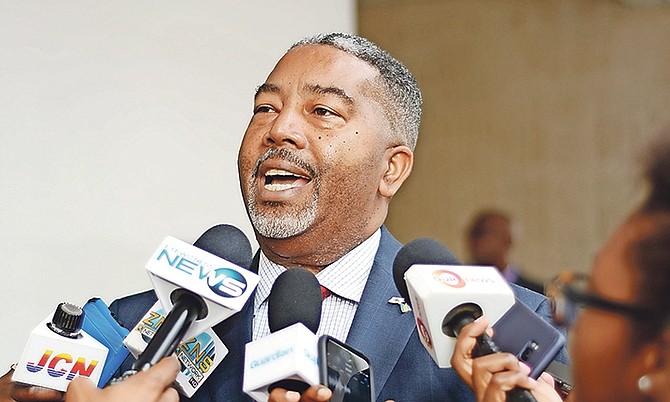 'Marital rape issue must be addressed'

Parking in a disabled bay - you’ll be fined

UNAUTHORISED use of disabled parking spaces will soon result in cash fines as a measure to deter the practise, Social Services Minister Frankie Campbell said yesterday.

Campbell: Everything in place for unified bus system this year

FORMER Transport and Local Government Minister Frankie Campbell yesterday said plans left in place by his team could culminate in a completed unified bus system this year.Mr Campbell, who now serves as the minister of social services and urban develo

'No one disenfranchised' by uniform budget cuts

AFTER criticism from former Prime Minister Hubert Ingraham and others on the government’s cuts to its school uniform assistance programme, Social Services Minister Frankie Campbell was adamant that no one has been disenfranchised as a result of the b

Escapees: Two still on the run

SOCIAL Services Minister Frankie Campbell yesterday expressed concern that the government has not “lived up to (its) responsibility” regarding security at the Simpson Penn Centre for Boys as two escapees remained at large.

School uniform assistance 'will be done by need'

PEOPLE wanting school uniform assistance will be assessed according to need, Social Services and Urban Development Minister Frankie Campbell said yesterday.The minister further insisted there was no “hard and fast rule” at the Department of Social Se

TRANSPORT and Local Government Minister Frankie Campbell said the July 31, 2018, deadline for the eviction of shanty town residents gives ample time for those in the community to find alternative housing. Noting the substandard conditions in these c