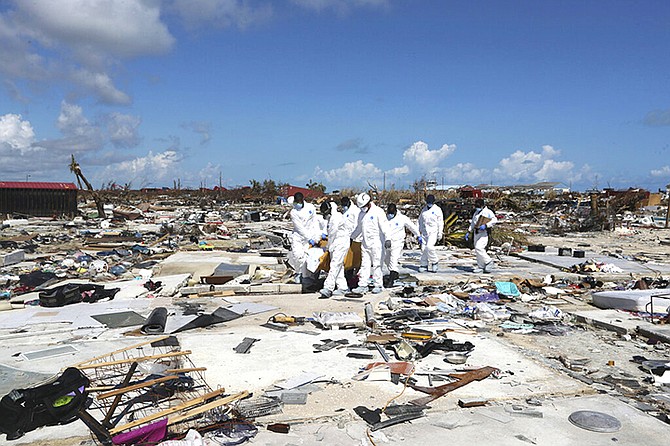 A body is carried out from The Mudd in Abaco on September 9. (AP Photo/Fernando Llano)

8.50pm UPDATE: In a statement released tonight, Commissioner of Police Anthony Ferguson said the death toll from Hurricane Dorian now stands at 50: “The Commissioner of the Royal Bahamas Police Force wishes to advise the general public, that as of Monday 9th September, 2019, officers have located and recovered fifty (50) deceased persons from the hurricane affected areas, forty-two (42) from the island of Abaco and eight (8) from Grand Bahama. We anticipate the discovery of more deceased persons, as the process of search and recovery progresses.

“As there are many more persons presume missing, since they have not been seen or heard from since the passage of hurricane Dorian, we are appealing to family members to file missing person’s reports with the police. We offer sincere condolence to those families who had love ones died during the hurricane. Please know that every effort is being made by Royal Bahamas Police Force along with our local and international law enforcement partners to bring relief and closure for everyone.May God bless the Commonwealth of the Bahamas.”

New ambulances from the PHA for Freeport

6.45pm UPDATE: U.S. emergency workers on Monday found five bodies in the debris left by Hurricane Dorian in Abaco, and they said they expected to find more victims a week after the devastating storm hit.

Bahamians, meanwhile, were also searching the rubble, salvaging the few heirlooms left intact by the Category 5 storm that, according to the official count over the weekend, has killed at least 44 people.

Members of the Gainesville, Florida, fire department were operating in the remains of The Mudd.

"We've probably hit at most one-tenth of this area, and so far we found five human remains," said Joseph Hillhouse, assistant chief of Gainesville Fire Rescue. "I would say based off of our sample size, we're going to see more."

After the Americans recovered bodies, Bahamas police and medical authorities moved in to conduct autopsies and fly the remains from Abaco to Nassau. 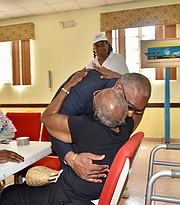 4pm UPDATE: From today's print edition – BAHAMIANS who survived Hurricane Dorian’s deadly wrath in far-flung East Grand Bahama settlements remain locked in survival mode. It’s the only way they can stave off mounting grief from the unimaginable, and still uncalculated loss as they wait for relief with little contact from the outside world - full story HERE

3.10pm UPDATE: National Emergency Management Agency officials emphasised Monday that no special arrangements have been made to facilitate the entry of Bahamians affected by Hurricane Dorian into the United States. The announcement came after crew of the Balearia Caribbean Ferry demanded that passengers without a US visa disembark the vessel, prompting the exodus of reportedly 100 or so people - full story HERE

• Bahamians interested in travelling to the US or Canada should ensure they have all of the usual immigration documents required by those countries for entry.

• NEMA has requested that the Ministry of Tourism and the Ministry of Foreign Affairs investigate a matter regarding a large passenger vessel that was headed to the United States.

• There are no mandatory evacuations - the plan is not to move everyone out.

• Temporary housing will be built in Abaco and Grand Bahama.

• Airports will be open for commercial flights at some point and NEMA will advise when that takes place.

• Free evacuations are continuing – approximately 4,800 have been evacuated.

• There are many flights from Grand Bahama and Abaco today – flight schedules are on NEMA’s Facebook page. (This was originally reported as three flights and has been corrected by NEMA)

• NEMA has invited the United Nations Office for the coordination of humanitarian affairs to assist with the flow between NEMA and the NGO community.

• NEMA has set up a satellite office at the National Training Agency on Gladstone Road to accommodate NGOs – who will work with the U.N. office for the Coordination of Humanitarian Affairs. This office will open tomorrow (Tuesday) at 8am. NEMA will reach out directly to NGOs via updates and Facebook.

• The best way for some of the nation’s foreign partners to assist is to continue to do business with the Bahamas and continue with their plans. ‘The Bahamas is still open’.

We're sending two Amazon Air planes packed with tens of thousands of Amazon-donated and customer-donated relief items to support those impacted by #HurricaneDorian in the Bahamas. Thanks to all the teams who are making this possible. https://t.co/iY86RGh9AX pic.twitter.com/Y3DHueJaXf

10.05am UPDATE: Amazon CEO Jeff Bezos has tweeted: “We're sending two Amazon Air planes packed with tens of thousands of Amazon-donated and customer-donated relief items to support those impacted by ‪#HurricaneDorian‬ in the Bahamas. Thanks to all the teams who are making this possible. ‪http://amazon.com/disasterrelief”‬

A SPOKESMAN for the National Emergency Management Agency (NEMA) has defended the organisation against criticisms of its response to Hurricane Dorian, insisting that officials are pleased with their efforts so far – full story HERE

MORE than 3,000 people have been evacuated to New Providence in the wake of Hurricane Dorian. According to National Emergency Management Agency spokesman Carl Smith yesterday, 3,500 people have come to the capital from Abaco and Grand Bahama, but only 860 persons have needed to be housed in approved shelters. There have been a number of other evacuations carried out by civil society – full story HERE

Spoke with members of the media today in The #Bahamas about @USAID's response to the aftermath of #HurricaneDorian. To date more than 47 metric tons of USAID supplies have arrived in The Bahamas from our warehouse in #Miami to help an estimated 44,000 people. pic.twitter.com/Sdxww5QQIW

• USAID says more than 47 metric tonnes of its supplies have arrived in the Bahamas to help an estimated 44,000 people.

Not time alarmists but should if it be that all along the colony's government have been hiding the actual numbers much higher number Abaco's and Grand Bahamaland's dead - the no place to hide reaction by colony's comrade populaces - will be unanimously staggering, yes, no .... And, each and every official or employee, who stood silent whilst Bahamalandair had balls charge desperate fleeing Out Islanders $75 by refusing allow them to board the plane, MUST be forthwith FIRED!! What manner citizen would've participated such heartless scheme .... there faces should be exposed, not concealed...

Went to work today. So many coworkers not here because they lost everything.

Help if you can, anyway you can. Sheets. Pillows. Canned food. Children's clothes. Anything.

NPCC - Blake Road has tons of clothing that they need to find a home for. Call there and they can try to arrange for delivery to places out East. 327-1660

The illegal Haitian communities in the Bahamas are going to be making out like bandits and exporting a lot of this donated stuff back to Haiti. Bahamian survivors of Hurricane Dorian who have lost everything will be left high-and-dry.

It seems so much easier to say that 50 deaths have been identified, but many many more have yet to be identified. This drip, drip of death confirmations is quite moronic and makes the government seem to be far behind the 8 ball!

Could we get some response and verification from "real people" on the ground in Abaco about the actual situation there please.

This is much like the aftermath of hurricane Katrina when George Bush mucked up recovery efforts.

Only 50 deaths as of Sept 10, is absurd. At this point the government needs to give actual numbers...not simply whose been identified. There are pictures circulating on social media about mass burials. Why is this not officially relayed to the public? Considering the length of time that has passed, I could see the neccessity for burying fatalities. Identified of not, they should be counted.