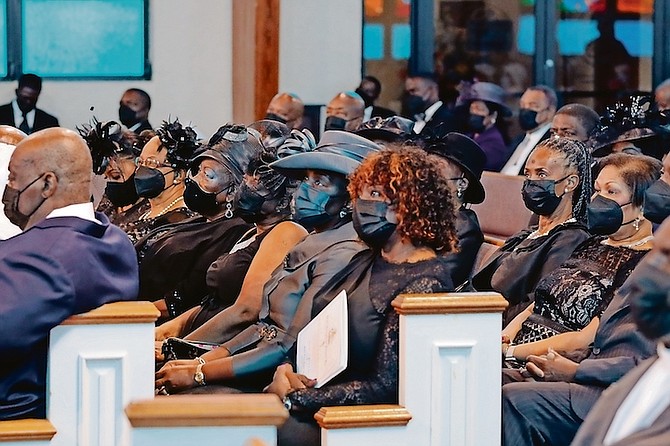 MEMBERS of the family of the Rev Charles W Saunders at his memorial yesterday. Photos: Donavan McIntosh/Tribune Staff 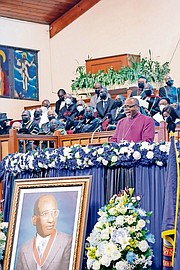 BISHOP Neil Ellis during the memorial to the Rev Charles W Saunders at Salem Union Baptist Church, pictured in front of a portrait of Rev Saunders.

A pillar of the Baptist church community, Rev Saunders was a tireless nation builder. During his 32-year tenure as superintendent of the Bahamas Baptist Union and 17-year presidency of the Bahamas Baptist Missionary and Educational Convention, he forever changed the lives of countless Bahamians. Distinguished guests from both the religious and political arena, including Prime Minister Phillip “Brave” Davis and Governor General Sir Cornelius Smith, attended the service at the church where Saunders had served faithfully as pastor for 39 years until his retirement in 2013.

During remarks at the service Rev Dr William Thompson, past president of the Bahamas National Baptist Ministry & Educational Convention, paid tribute to his friend.

“I stand now in this pulpit because I am a Christian, I come to witness his passing into the fullness of his inheritance, but because he was my mentor and friend I come to weep and mourn over his fallen human form. There is a passage born in ancient literature, 1st Samuel 3 and 38 which states, and I quote ‘Know we not that a prince and a great man has fallen in this realm?’ I beg you to indulge to allow me to paraphrase and say, ‘Don’t you know that a prince and a good man has fallen in The Bahamas?’” 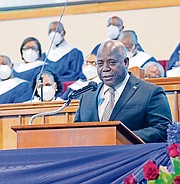 He said the nation had lost an immense talent with Rev Saunders’ death, whose contribution to the Bahamian people was immeasurable.

“To measure the meanings and works of Charles Saunders is as if one were to take a thimble and try to empty an ocean. It would be as if one sought to measure the expanse of heaven with the span of a human hand. My brothers and sisters, something vast and noble has passed from among us. It is like a mighty tree has fallen leaving an empty and gaping space against the sky where he once stood. His life was an epic, a grand tale woven by God himself,” he said. 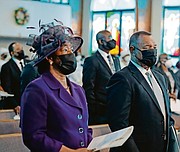 Bishop Neil C Ellis, senior pastor at Mt Tabor Church and officiant at the service, during his sermon spoke to the tremendous legacy Rev Saunders left behind.

“The story of his life (Saunders) is wrapped up in something he said to me almost 34 years ago on the first anniversary of my pastorage. ‘Son if you’re not making someone else’s life better you are wasting your life.’ This statement shifted my focus on doing ministry and gave birth to the socialisation arm of the Mount Tabor Church,” Bishop Ellis said.

Mr Davis, during his tribute to Rev Saunders, applauded his contributions to the nation and how he positively influenced the political landscape of the country from the pulpit. 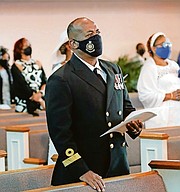 COMMODORE Raymond King at the memorial.

“Rev Dr Saunders – this great pastor, administrator, and teacher – without the trappings of politics, invariably and positively influenced the political landscape. Every sermon that he preached, whether it was from this place or another, his reminder was that our conduct in respect of public affairs and management of public resources ought to guarantee the realisation of an ordered society. These principles require governance that is essentially free of abuse and corruption with full regard for the rule of law. His were sermons that took into account that Christians were citizens with a higher responsibility for the development of our Bahamas. With his passing, we have lost one of The Bahamas’ finest patriots,” Mr Davis said.

Byron Saunders, Rev Saunders’ son, thanked Mr Davis and his government for their effort in honouring his father in such grand fashion. He also extended personal thanks to former Prime Minister Perry Christie, who was in attendance, for allowing his father the opportunity to serve the Bahamian people in public office during his administration.

“Former Prime Minister, who is here, Mr Christie, Daddy and Mum appreciate you for giving my father the opportunity to serve you and serve this country.”

In his final respects to his father Byron Saunders called Rev Saunders a great man and his lifelong hero.

“I am privileged and honoured just to give brief remarks on my father to the special bond that we shared. Many have spoken about him, but I said simply when people ask, ‘Who is your hero?’ Charles W. Saunders,” he said.

Rev Saunders died last month at the age of 91.