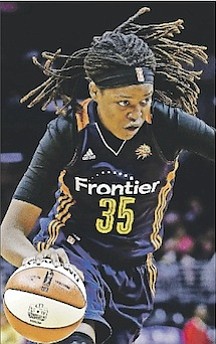 JONQUEL Jones and the Connecticut Sun made their WNBA preseason debut and the fourth year forward looks primed to step into her role as a team leader this season.

THE postseason accolades continue to roll in for Bahamian WNBA superstar Jonquel Jones.Jones was named to the All-WNBA Second Team as the league continued to roll out its postseason awards.It concludes a season where the second year Connecticut Sun f

JONQUEL Jones recorded her second consecutive double-double, but the Sun also suffered their second loss in a row and fell below .500 on the season.Jones finished with 13 points and 17 rebounds in the Sun’s 87-79 loss to the defending WNBA champion L

JONQUEL Jones continues her torrid pace in posting stellar numbers and her performance over the weekend led the Connecticut Sun to their latest win and a .500 win-loss record on the season.Jones finished with 16 points, eight rebounds, four blocks, f

Jonquel seeks the public’s help in her all-star selection

JONQUEL Jones is having an All-Star calibre season for the Connecticut Sun and the second-year forward is seeking help from the Bahamian public in her selection bid.

JONQUEL Jones posted her fourth double double of the season and led the Connecticut Sun to their first home win of the year. Jones finished with 20 points and 14 rebounds to lift the shorthanded Sun to a dominant 104-71 over the Atlanta Dream at Moh

SHE finished just one point shy of a third consecutive double-double but Jonquel Jones continues to be a force on the boards for the Connecticut Sun.Jones finished with 14 rebounds and nine points in the Sun’s 85-77 win over the San Antonio Stars at

THE Connecticut Sun organisation expects Jonquel Jones to have a breakout season in her sophomore campaign in the WNBA, and Jones delivered immediately with a new career high in her season debut.

Jonquel puts up another double double

FOLLOWING a productive rookie season, Jonquel Jones looks to continue her offseason development in Korea as her season tips off in just under two weeks.

In WNBA, Jonquel Jones’ ‘long-term future is so bright’

HEADED into the season finale, the Connecticut Sun were already eliminated from playoff contention, but Bahamian rookie forward Jonquel Jones gave the Sun front office reasons to be optimistic about the team’s future.