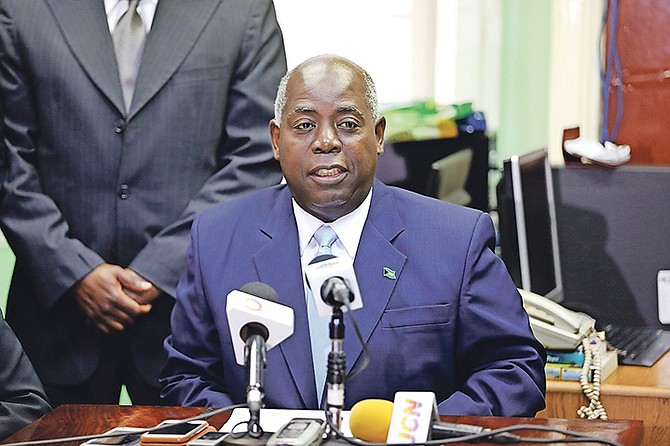 INSIGHT: A new perspective you say?

WITH PLPs across the spectrum of the archipelago gearing up for its convention, which begins today, the rhetoric coming out of the party suggest there is a “new perspective” emanating from the party. Much of this is what is being purported by the youth movement in the PLP with the hopes that it would resonate with millennials who were mostly responsible for the Progressive Liberal Party’s resounding rejection on May 10.

A DAY after Deputy Prime Minister K Peter Turnquest said the former government diverted more than $40m from a $150m hurricane relief and recovery loan to win the most recent election, Opposition Leader Philip “Brave” Davis denied the allegation saying he was “confident” the Christie administration used the money for its correct purpose. To suggest otherwise, Mr Davis told reporters outside of the House Of Assembly yesterday, suggested the former government committed a criminal offence, which he called “damnable”.

Davis vows: I’ll cut off heads to save party

INTERIM Progressive Liberal Party leader Philip “Brave” Davis has vowed to “cut the heads off” anyone in the PLP who stands in the way of the party’s “growth and progress”.

NOT only did Official Opposition Leader Philip “Brave” Davis decry the “hypocrisy” of the Minnis administration for seeking to enact its version of the Interception of Communication Bill, but he said in the House of Assembly yesterday the administration’s tabled bill infringes on the civil liberties of Bahamians in ways the Christie administration’s Bill sought to avoid.

'PM should have consulted before Dominica offer'

OFFICIAL Opposition Leader Philip “Brave” Davis said before the government decided to allow Dominicans into the country, Prime Minister Dr Hubert Minnis should have engaged in discussions on the move and offered Bahamians the concrete details. In an

‘Board sets exec salaries, not govt’

PROGRESSIVE Liberal Party Leader Philip “Brave” Davis and Exuma MP I Chester Cooper toured Family Islands on the weekend, courting delegates for support as an apparent team ahead of the organisation’s October convention. In a recent post on Mr Davis

No need for me to say sorry, insists Davis

LEADER of the Official Opposition Philip “Brave” Davis yesterday seemed to downplay certain portions of his strongly worded letter sent to Prime Minister Dr Hubert Minnis earlier this month, which suggested that the Progressive Liberal Party would possibly seek retribution over the arrests and prosecution of former PLP politicians.

PLP road back to power ‘not easy’

OPPOSITION Leader Philip “Brave” Davis called Exuma MP Chester Cooper’s evaluation of the Progressive Liberal Party’s election defeat “a newbie assessment” and - while accepting some of the critique - likened him to a child who tells the truth, no matter the cost.