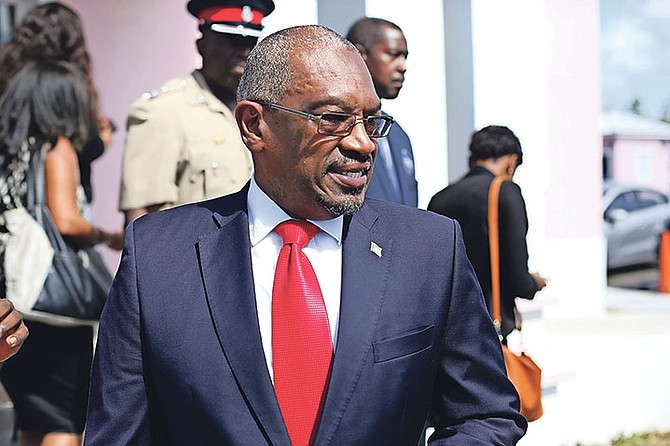 DAYS before the 2017 general election, the Christie administration renewed Sir Baltron Bethel’s contract as a senior policy advisor and consultant in the Office of the Prime Minister and Ministry of Tourism nearly a year before it was set to expire and increased his salary, agreeing to pay him $800,000 over a four-year period. This is according to documents tabled in the House of Assembly by Prime Minister Dr Hubert Minnis yesterday.

NEARLY two weeks after taking a hard line on immigration, Prime Minister Dr Hubert Minnis struck a softer tone at The Haitian Metropolitan Church of the Nazarene Sunday, stressing this country’s ties to Haitians and pledging to expeditiously grant residency permits and citizenship to those eligible for it.

PRIME Minister Dr Hubert Minnis has been “surprised” by the polarising responses Bahamians have had to his offer that Dominican students be allowed to attend school here, Press Secretary Anthony Newbold said yesterday.

INSIGHT: A Word to The Wise - Part II

DURING the last week, there have been multiple pieces in both major local publications covering the quiet storm that has developed following China’s new policy on outbound investments. What is concerning is the reaction to this new policy from the “people’s government” who would have us believe this would not impact the Bahamas, and generations of Bahamians to come in a serious way.

'Davis sorry - but where's the apology?'

‘Politicians can’t get rich leaving the poor behind’

PRIME Minister Dr Hubert Minnis said last night it is “unfair and unjust” for politicians to accumulate considerable wealth from corruption, while the citizens of a country, especially the poor, are left behind.

Minnis is defensive on Baha Mar

PRIME Minister Dr Hubert Minnis was on the defensive yesterday over his administration’s apparent change in tone regarding how it intends to handle Baha Mar moving forward.

IN THE months ahead of the May 10 general election, one vendor received more than $8m to clean up New Providence in the wake of Hurricane Matthew of the $28,975,180 spent on these efforts in the country, while the government missed out on a more than $31m insurance payout because it opted not to pay the country’s Caribbean Catastrophic Risk Insurance (CCRIF), Prime Minister Dr Hubert Minnis revealed in Parliament.

Govt payroll went up $2.5m in month of general election

AS the country geared up for the May general election, the government’s payroll increased by $2.5m that month as new people were hired in the public service under the Christie administration, Prime Minister Dr Hubert Minnis revealed in Parliament yes

Homes still unrepaired after hurricanes in 2016 and 2015

WITH the 2017 hurricane season opening on Thursday, Prime Minister Dr Hubert Minnis noted yesterday that there are still homes in a state of disrepair following 2016’s Hurricane Matthew and Hurricane Joaquin in 2015.This is despite a hefty loan in t