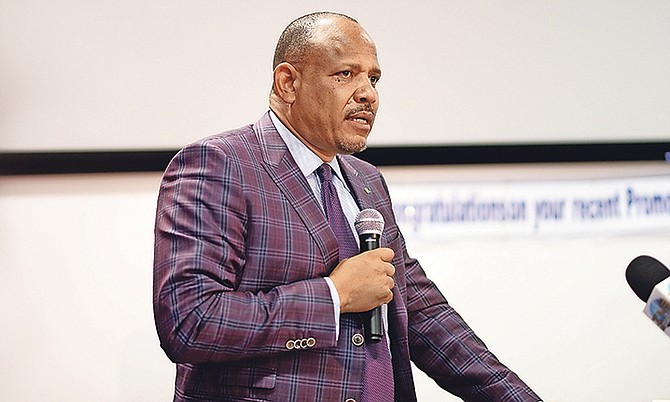 Waiting is over for 25 nurses

TWENTY-FIVE nurses received their job appointment letters from the Ministry of Health after waiting for more than a year. Speaking to reporters at a press conference on Wednesday, Health Minister Dr Duane Sands said it represented the end of an unfo

MORE than 17,000 Bahamians “seriously considered” attempting suicide in the last year, according to the Ministry of Health’s recently conducted STEP survey.

HEALTH Minister Duane Sands said yesterday his ministry has made significant headway on nursing concerns, particularly on outstanding payments.However, it remains unclear whether its most contentious point of dispute over changes to the nurses’ shift

HEALTH Minister Dr Duane Sands has responded to a viral post on social media regarding the ordeal a mother had while delivering her baby in the public maternity ward of Princess Margaret Hospital late last month.

Fees to rise - including morgue fees

IN observance of World Health Month, a number of activities have been planned in Freeport to sensitise the public about health initiatives and challenges with global implications.The Grand Bahama Health Services World Health Committee has announced t

WHILE the government’s proposed overhaul of the national breadbasket list is expected to negatively impact revenue intake for retailers, it is a move welcomed by grocers, Philip Beneby Sr, president of the Bahamas Retailers Association told The Tribu

Sands: $6.6m for clinic to see five patients a day

HEALTH Minister Dr Duane Sands yesterday accused the former administration of going forward with the $6.6m upgrade to the Smith’s Bay Clinic in Cat Island despite a nearly 40 per cent decline in visits to clinics on that island in the past decade.

WHEN anyone is declared dead on Cat Island they are stuffed into a body bag, placed in a bathtub and blanketed with ice to slow the process of decomposition, The Tribune has been told.

ELECTIVE surgeries at Princess Margaret Hospital resumed yesterday following last week’s bed shortage crisis, according to Health Minister Dr Duane Sands.Health officials on Friday announced elective surgeries had to be suspended that day due to an u

EMERGENCY services throughout the country will undergo “major changes very soon,” according to Health Minister Dr Duane Sands, who once again decried the “horrible realities” of the public health care system.

Marijuana issue ‘not on agenda’

THE government yesterday launched a national food and nutrition security policy (FNSP) and plan of action.The initiative seeks to combat the nutritional challenges facing the country. These include undernourishment, micronutrient deficiencies and hig

THE government can no longer permit “free passes” in the health services sector due to huge revenue deficits, according to Health Minister Dr Duane Sands who yesterday said he was willing to meet with irate funeral directors in response to their protest outside of the Princess Margaret Hospital on Friday.

HEALTH officials do not believe there are any active cases of tuberculosis at R M Bailey Senior High School despite 28 students and eight teachers testing positive for the disease, according to Health Minister Dr Duane Sands yesterday.

UPDATED: Screening for school as pupil gets TB

THE Ministry of Health and the Department of Public Health are investigating a case of tuberculosis (TB) in a student at R M Bailey Senior High in New Providence.

'We are part of US opioid problem'

Sands: Be honest on domestic violence

BAHAMIANS need to lift the veil of secrecy surrounding crimes against women and children, Minister of Health Dr Duane Sands urged yesterday, as he noted linkages of such acts to violence in school and the wider community.

This fellow loves to be in the news.