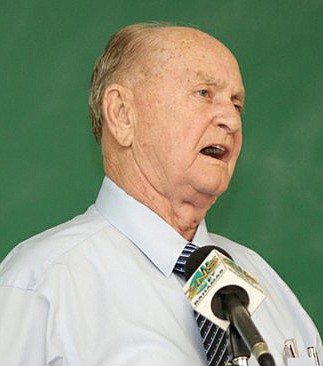 ‘Total devastation’ if VAT was put at 15%

Super Value’s principal yesterday said increasing the VAT rate to 15 percent would have inflicted “total devastation on the economy” with food prices set to rise 10-15 percent in the New Year.

Super Value’s principal yesterday said he is battling supply chain disruption “every minute of the day” while reassuring that possible 8-10 percent Christmas price rises will not be “across the board”.

Super Value’s president said higher prices are coming to stores in October, but he will do the best he can to keep prices from getting out of control.

Super Value’s president yesterday said he was hoping to avoid the perfect storm of an earlier COVID curfew and potential hurricane if tropical depression ‘six’ becomes a major threat later this week.

Super Value’s president yesterday urged the authorities to “brutally enforce” COVID-19 health protocols as he revealed the supermarket chain has “had more cases in the last month than ever before”.

Super Value fighting price hikes ‘as long as we can’

Super Value’s president yesterday pledged to hold-off food price increases as long as possible, but reiterated that eight to ten percent rises by Christmas “is not a prediction but a fact”.

FALLOUT from the COVID-19 pandemic has caused people to tighten their purse strings, Super Value President Rupert Roberts has said, while noting “more and more” shoppers have been relying on the store’s food stamps to shop.

Super Value’s president yesterday warned that consumers will have “a big pill” to swallow by Christmas, as he predicted that grocery and meat prices will increase by eight percent and 10-12 percent respectively.

Super Value has warned its 1,000-strong workforce they “will face termination” if caught disobeying COVID-19 protocols, its principal warning yesterday: “We cannot go back into lockdown.”

Super Value’s principal yesterday urged Bahamians to “pull out all the stops” to help re-open the economy and become COVID-19 vaccinated with the supermarket chain’s sales “in freefall”.

‘Retaining curfew is fine by me’

SUPER Value CEO Rupert Roberts says he feels much safer with the COVID-19 curfew in place and believes last year’s drop in crime is due to coronavirus restrictions.

Super Value's president last night said the Prime Minister wants "to maintain a certain level of control" over his COVID ease as he revealed food stores were given the choice of which weekend day to open.

Super Value's principal says he plans to open the supermarket chain at 6am from today in a bid to reclaim some of the shopping hours lost to the new COVID-19 restrictions.

Rupert Roberts: it’s crazy now and will be ‘til Friday night

SUPER Value owner Rupert Roberts says while the new COVID-19 restrictions will affect sales, store executives will not “second guess” the recommendations made by health officials to curb the spread of the disease.

A non-profit coalition yesterday unveiled an "end-to-end" workplace testing and management solution in a bid to help The Bahamas to escape the "sledgehammer approach" of COVID-19 lockdowns.

Roberts unable to say if worker died of virus

SUPER Value’s owner Rubert Roberts said the food store chain is mourning the death of an employee but could not say if it is COVID-19 related. It was claimed on social media that a store employee died several days ago, allegedly from COVID-19, and c

Super Value will shortly reduce its warehouse inventory to pre-COVID-19 levels with the threat of food shortages and "embargoes" having eased, its president told this newspaper.

Super Value's president last night said the reversal of New Providence's near-total lockdown was "better than back to normal" as his stores can now open for longer than they did pre-COVID-19. Rupert Roberts told Tribune Business that his 13-store su

SUPER Value owner Rupert Roberts says he is seeking permission for his employees to buy groceries on Wednesday after the privilege was granted to employees of the AML Group of Companies despite the seven-day lockdown.

Super Value’s president has suggested that all persons aged over 65, and those with pre-existing medical conditions, remain at home to facilitate the Bahamian economy’s COVID-19 re-opening.

Super Value’s president and The Bahamas’ marinas chief yesterday vehemently denied claims they “colluded” with a property manager to help deprive a condo owners group of thousands of dollars. Rupert Roberts and Peter Maury, the Association of Bahama

Super Value’s president is urging the government to clarify how it will tackle leftover single-use plastic products as the full ban on their use takes effect today. Rupert Roberts told Tribune Business he was unsure whether the Department of Environ

Super Value’s president yesterday revealed he is bracing for a “below normal” sales decline as the post-COVID lockdown reality bites, and said: “If we fall ten percent below last year we’ll be in trouble.” Rupert Roberts told Tribune Business that t

Super Value’s principal yesterday revealed he is seeking to build six months’ worth of food inventories as he branded the extended shopping hours as a “relief” for both merchants and consumers.Rupert Roberts voiced optimism to Tribune Business that t

‘Lockdown directive left us in chaos'

SOME stores and pharmacies in New Providence report being sold out of face masks, hand sanitizers, and Lysol spray as Bahamians prepare for a possible coronavirus outbreak here. There are no reported or suspected cases of the new deadly coronavirus

SUPER VALUE president Rupert Roberts yesterday defended the food store chain’s new packing policy, stating the rule was introduced to safeguard against theft which has increased since the government’s ban on single-use plastics.

Super Value’s principal yesterday said it was “music to my ears” to hear the government’s WTO chief negotiator state The Bahamas is almost certainly not joining under this administration.Rupert Roberts, who has vehemently opposed becoming a full Worl

Supervalue’s owner says retailers will have to ‘wait and see’ what margins are allowed on the items to be added to the breadbasket list, noting if the low grocery margins are used for such perishable items it could force smaller retailers out of business.

Super Value chief: ‘cut our own path’ outside the WTO

Super Value’s owner yesterday said he still believes The Bahamas should “cut its own path” despite trade experts finding it would be “moderately positive” to join the WTO.

A billionaire US family has been confirmed as the purchaser-in-waiting for Rupert Roberts’ Bimini Sands resort, Tribune Business can reveal.

Super Value’s principal has warned he may have to close his paper manufacturing plant due to tariff cuts, as he called on the government to outline WTO’s benefits instead of attacking him.

The Bahamas’ chief WTO negotiator yesterday said the concerns expressed by Rupert Roberts are based on “illusion and fiction”, adding: “We are doggedly pursuing the country’s best interest.”

Super Value’s owner says he is opposed to joining the WTO and will never change his mind even if studies determine “it’s the greatest thing for The Bahamas”.

Super Value’s owner says his Bimini Sands property will be transformed into “a little gem” matching nearby Cat Cay through the deal that will secure his resort industry exit.