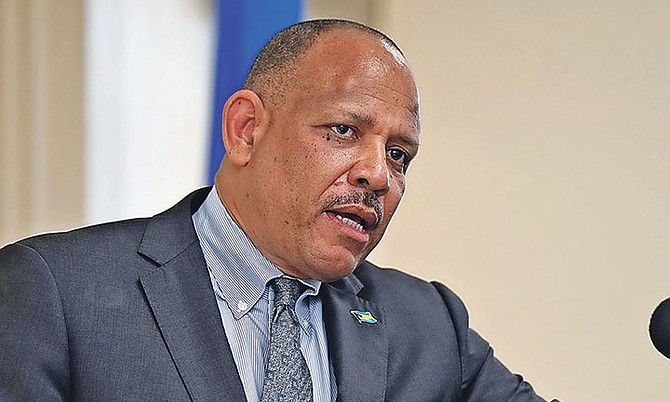 $2bn pension liability ‘blows everything up’

An ex-Cabinet minister yesterday warned “we blow everything up” if an estimated $2bn in unfunded civil service pension liabilities is added to the national debt, adding: “We never thought judgment day would come.”

FORMER Health Minister Dr Duane Sands says while Princess Margaret Hospital is capable of handling the recent increase of COVID cases, the situation could potentially cause “implications and repercussions” for patients and staff of the medical facility.

Ex-minister: ‘Use carrots, not stick’ over COVID jabs

A former Cabinet minister yesterday added his voice to those opposing mandatory COVID-19 vaccinations, telling Tribune Business: “Better to use a carrot than a stick.”

Sands: We have a big problem

FORMER Minister of Health Dr Duane Sands believes the country has reached a point where “draconian interventions” might be needed to bring rising COVID-19 cases under control, saying the number of cases recorded in the last few days have been “frightening”.

‘We must watch out for double standards’

‘Just what the doctor ordered’

Doctors Hospital’s proposed Freeport “flagship” with the Cleveland Clinic is “exactly what the doctor ordered” to revive the Bahamian economy post-COVID, an ex-Cabinet minister asserted yesterday.

Sands - I’m sure I’ll be selected

FORMER Health Minister Dr Duane Sands has expressed confidence that he will be ratified as the Free National Movement’s Elizabeth candidate for the next general election.

Healthcare ‘disaster’ if no expanded NHI

The Bahamas will face a healthcare “disaster” if National Health Insurance (NHI) does not fulfill its potential, an ex-health minister has warned, urging: “We must get past this ‘deep state’ debate.”

‘Time to move on from PCR test’

FORMER Health Minister Dr Duane Sands has suggested the government move away from RT-PCR tests as the gold standard to determine COVID-19 infection and instead embrace “newer technology” that he says is cheaper to operate.

Sands: We must educate public on vaccine

OFFICIALS ALERT OVER U.K. STRAIN: No immediate plans for travel ban - but that could change

WITH a new strain of COVID-19 spreading in parts of England, Health Minister Renward Wells said while there are no immediate plans to impose a travel ban against the UK, officials will continue to closely monitor the situation.

‘VACCINES MUST NOT BE RUSHED’: Sands urges caution as U.S. starts rollout for new drugs to combat COVID

My ambition? Minnis can win it

FORMER Health Minister Dr Duane Sands said he believes the Free National Movement can win the next general election with Prime Minister Dr Hubert Minnis at the helm of the organisation, though he cautioned that the party faces challenges.

Sands: We need to reset our strategy

AFTER New Providence and Abaco spent the weekend in lockdown, former Minister of Health Dr Duane Sands said the country needs a national reset to deal with the rising COVID-19 cases which are “at least twice the amount” reported.

A former Cabinet minister last night confirmed the Government showed "no interest" in a proposal made "months ago" to significantly ramp-up COVID-19 testing during the pandemic's early stages.

Dr Duane Sands yesterday warned that current COVID-19 infection rates would "knock us out of the tourism market" as he called for a "radical change" in The Bahamas' approach to fighting the virus.

ELIZABETH MP Dr Duane Sands said yesterday the county was not winning the battle against COVID-19, despite ongoing Emergency Powers Orders that the government now seeks to extend.

WAYNE Munroe, QC said yesterday Elizabeth MP Dr Duane Sands’ stance against an extension of the state of emergency is “late”, but he cannot be faulted for finally seeing that no one man should have the power to dictate what an entire country does.

Sands accuses govt of blundering by: • Having no coherent plan to tackle crisis • Vilifying public for COVID spread

FORMER Minister of Health Dr Duane Sands acknowledged that he has aspirations to one day become leader of the Free National Movement.

AN ABACO resident yesterday lambasted the timing of former Health Minister Dr Duane’s Sands comments which criticised how the government handled Hurricane Dorian victims that went missing after the storm.

‘We need clarity on Dorian dead’: Sands hits out over handling of missing hurricane victims

FORMER Health Minister Dr Duane Sands assailed the Minnis administration’s handling of people who went missing after Hurricane Dorian yesterday, saying the credibility of the government has been hurt by how the matter has been handled.

BAHAMIANS have mixed views on Dr Duane Sands’ resignation from Cabinet this week. Raleigh Francis, an insurance executive, feels Dr Sands “got played by political operatives”. “Dr Sands could not have been the only man involved. He got played by po

ALICIA WALLACE: More questions than answers which Sands’ resignation does not make go away

No one was pleased when news broke that two permanent residents were allowed to enter Nassau early last week while the borders were closed. It was said these people brought 2500 COVID-19 testing swabs – not testing kits – which were donations.

PAMELA Hart, chairman of the Free National Movement’s Elizabeth constituency branch, reacted with sadness to Dr Duane Sands’ resignation from Cabinet and vowed the group will continue to support him as its MP.