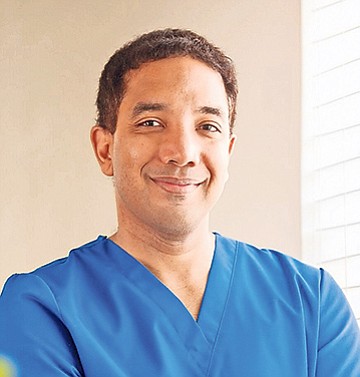 New solutions for women who have urinary leaks during intimacy

It is the embarrassing secret sadly suffered in silence by thousands of Bahamian women: an uncontrollable loss of bladder control with urinary incontinence during sex.

The good news: prostate cancer, if detected early, can be successfully treated, with a 98 percent prostate cancer specific survival ten years after treatment.

Bahamian men are sadly well known for generally showing very little concern for their health and physical well being. They have most of the risk factors for aggressive prostate cancer such as African ancestry, obesity and high alcohol intake.

Got Kidney Pain? Are you stoned?

Kidney stones are relatively common, occurring in approximately 12% of men and 6 % of women per year. Why more men than women is mostly due to a man’s diet. Kidney stones are quite common across all age groups.

The ordeal of bedwetting

Bedwetting is a traumatic ordeal, too often endured in embarrassing silence by families. Nocturnal enuresis or bedwetting was regarded in one study as the third most traumatic event that a family can face.

An early Christmas gift of scientifically based facts for Bahamian men.

‘Knowing your numbers’ is important for bladder health

The link between prostate and breast cancer

What does prostate cancer have in common with breast cancer?The answer is the BRCA 1 and 2 gene mutations. The BRCA 1 and 2 genes were first discovered in 1994.BRCA stands for Breast Cancer associated gene. Women with the inherited BRCA 1 or BRCA 2 g

‘Movember’ – An opportunity to change the culture of silence

“Movember” is here again. Every year around the world, the month of November is taken as opportunity to focus on the health awareness of men. Men around the globe are encouraged to not shave during November and grow a moustache as a sign of solidarity and unity in the effort to emphasise the importance of men’s health awareness.

Got kidney pain? Are you stoned?

Kidney stones are relatively common, occurring in approximately 12 per cent of men and six percent of women per year. Why more men than women is mostly due to a man’s diet. Kidney stones are quite common across all age groups.

Does pornography lead to erectile dysfunction?

Every man will face some form of erectile dysfunction is his lifetime, whether it takes the form of poor quality erections, difficulty maintaining an erection, or premature ejaculation.

Many women can unfortunately laugh, sneeze, cough and pee all at the same time. It is called stress urinary incontinence and it is a heartbreaking disorder that has tens of thousands of our Bahamian women afraid to laugh or reluctant to exercise, or even mindful when bending to lift a child because they are going to leak urine.

More awareness needed to battle prostate cancer in the Bahamas

September is Prostate Cancer Awareness Month. The Bahamas as a nation is trying to deal with a natural disaster of epic proportions.Sadly, prostate cancer continues to be a national health disaster, with hundreds of Bahamian men being diagnosed ever

All you need to know about the male menopause

Andropause, male menopause, is a real health condition that thousands of Bahamian men, like their counterparts worldwide, often suffer unknowingly.

There are many potential causes of scrotal and testicular pain.

Why Bahamian men are at high risk of prostate cancer

Vasectomies are the subject of many unfounded myths and plagued by numerous negative connotations. Many Bahamian men, like men everywhere, have a fear of the unknown regarding vasectomies.All children are a blessing, but once you have completed your

Every Bahamian man will face issues with erectile dysfunction at least once in his lifetime. It is an embarrassing affliction that many men suffer with needlessly and in silence.

The United States Food and Drug Administration (FDA) on June 21 approved the new “female Viagra”, a sexual libido enhancing medication called Vyleesi. Vyleesi is not a pill; it is a self or partner administered injectable that should be given 45 minutes before sexual intercourse. It has been recommended that Vyleesi should not be administered more than once in a 24-hour period and it should not be used more than eight times in a given month.

How to perform better tonight

Getting a good quality erection and maintaining an erection can be an overwhelmingly stressful task for many men of various ages.Erectile dysfunction will affect every man to some degree at some point in their lives. But erection problems should neve

Penile cancer: What you need to know

Penile cancer is relatively rare in developed countries, but in some penile cancer could represent as high as 20 percent of all male cancers. In the United States, according to the American Cancer Society, penile cancer affects one in 100,000 men. Pr

Many men, women and children have their lives controlled by their bladder issues and it often drastically reduces the quality of their lives.Afraid to drink a glass of water when away from home because of the potentially embarrassing problem of needi

Viagra obtained US Food and Drug Administration (FDA) approval in March of 1998 and the world of erectile dysfunction has never been the same. The sexual enhancement pills industry is huge and continues to grow, with Viagra making over $2 billion las

Many men and women are unfortunately plagued by recurrent episodes of painful urination, called dysuria.

Every man will face some form of erectile dysfunction is his lifetime, whether it takes the form of poor quality erections, difficulty maintaining an erection, or premature ejaculation. To attain and sustain an erection, a man requires an adequate penile blood supply and nerve supply and sufficient male hormone testosterone, amongst other physiological components but the psychological and emotion contribution can have a potentially profoundly negative affect on erectile function.

A spotlight on testicular cancer

April is Testicular Cancer Awareness Month. The importance of self-awareness and education regarding testicular cancer is going to be stressed during this month, particularly for men under 40 years of age.

Ten reasons why men should see an urologist

Difficulty standing up for the second round

Last week’s urology column dealt with the often embarrassing topic of premature ejaculation that affects as many as one in three men.

Tens of thousands of Bahamian women and men have their bladder dictate their lives and reduce the quality of their everyday lives.

Stop peeing all night, every night

Repeatedly waking up at night to urinate can be a frustrating problem endured by tens of thousands of Bahamian women, men and children.

Blood in the urine should never be ignored

Are you seeing red in your toilet bowl?

There are many potential causes of testicular and scrotal pain and swelling.

Bedwetting: Both kids and parents suffer

Bedwetting is a traumatic ordeal, too often endured in embarrassing silence by families. Nocturnal enuresis, or bedwetting, was regarded in one study as the third most traumatic event that a family can face.

The importance of testosterone

Testosterone is the male sex hormone that is an important component of what makes men essentially men.

You can always rise again

A less firm, unsatisfactory erection...it is a common complaint of adult men of various ages but more commonly a dreadful state of affairs for middle-aged men and older.

Prostate cancer will affect one in six men in their lifetime. Early detected low-volume, low-grade, early-stage prostate cancer has an excellent cure rate of 97 to 98 percent.

Advanced treatment for prostrate enlargement now available in the Bahamas

Every Bahamian man will face issues with erectile dysfunction at least once in his lifetime. It is an embarrassing affliction that many men suffer with needlessly in silence.

Prostate Cancer affects one in six men in their lifetime.Almost half of men 50 years or older are afflicted with Benign Prostate Hyperplasia BPH, a non-cancerous enlargement of a man’s prostate. Almost all men by the age of 70 years old suffer from B

A solution for urinary incontinence in women

Do you cough, laugh or sneeze and pee all at the same time?

Failure to stand erect? You are far from alone

Question: Greetings, Dr Pinto. I am a 54-year-old married man with diabetes and I have had worsening erection problems for nearly two years. I am embarrassed by the problem, which has affected my self-esteem.

Question: Dear Dr Pinto, I am 47 years old and have never had a prostate check because of the dread of violation by the gloved finger prostate exam. My older brothers, cousins and most of my uncles also never go for prostate work up for the same reason. What other way can we all get a prostate checkup?

Got kidney pain? Are you stoned?

Kidney stones are relatively common across all age groups, occurring in approximately 12 per cent of men and six per cent of women. The higher rate of occurrence in men is influenced by diet.Higher incidences are also seen in tropical climates, as i

The embarrassing curve ball in the bedroom

Q: Dear Dr Pinto, I am a 38-year-old married father with an embarrassing problem regarding a distressing curvature of my stiff penis that makes intimacy almost impossible. I am very depressed and my self-esteem is at a low point. Can you as a doctor

By Dr Greggory Pinto Q: I am a 56-year-old male with hypertension and, for the past three years, I have woken up at least six to seven times a night with the urge to urinate. I also suffer from weak urine stream and dribbling. My wife also wakes up m

By DR GREGGORY PINTO As a urologist I have treated thousands of men and women with kidney stones, particularly as a postgraduate fellow with world-leading kidney stone surgeon Professor Andreas Gross, in Hamburg, Germany.I have seen macho men cry lik

Men, you can now legitimately tell the women in your life that more frequent ejaculation can reduce your risk of prostate cancer.A new study by Harvard University has found that men who ejaculate 21 times a month or more have a significant reduction

Dr Greggory Pinto, a Bahamian urologist and laparoscopic surgeon from the Surgical Suite, answers the question of a concerned potential patient. Q: “Dr Pinto, I am a semi-retired, 62-year-old Bahamian male and I must admit that fear has kept me from