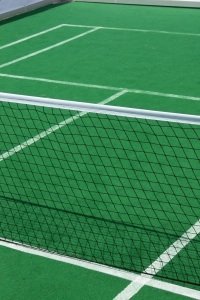 WHEN the Bahamas Lawn Tennis Association’s 45th ranked women’s team travels to Lambaré, Paraguay, next month for the Americas Group 1 of the Fed Cup by Pariba, two of the top players from last year’s undefeated team in Group II in the Dominican Republic will not be making the trip.

WHILE play in the main draw won’t get started until Wednesday, the Bahamas Lawn Tennis Association is allowing 14 other male players to earn eight spots out of the qualifying round to join the top eight in the Giorgio Baldacci Battle of the Elite Players Tournament.

'We should be proud of our Davis Cup team'

Team captain John Farrington said the public should be proud of the Bahamas men’s team that fell one match shy of advancing out of the American Zone III Davis Cup tie in La Paz, Bolivia, over the weekend.

Devin Mullings and Timothy Neilly, who both missed last year’s trip because of injuries, have been named to Bahamas Lawn Tennis Association’s four-member team that will carry the national flag at the Davis Cup American Zone III Davis Cup tie in La Paz, Bolivia.

BLTA to launch 'play and stay' programme this weekend

A GLOBAL shift in the rules governing youth tennis will have a direct impact on the development of the game locally, bringing a wider cross section of newcomers to the sport.

Mortimer moves on with new position

While Dentry Mortimer has moved on with a new position as the pro tennis coach at the Gym Tennis Club in Winton Meadows, the Bahamas Lawn Tennis Association (BLTA) has announced that the former first vice president and director of their junior development programme has been replaced by Kim O’Kelley and Giorgio Baldacci.

THE BAHAMAS Lawn Tennis Association (BLTA), in conjunction with one of the top tennis coaches in the country, is in the infant stages of establishing an event they hope will revolutionise the development of the sport at the junior level.

IT IS quite unusual to see siblings playing against each other. But on Saturday at the National Tennis Centre, Nikkita Fountain teamed up with Jamaal Adderley as they won the mixed doubles title at the Bahamas Lawn Tennis Association’s Hot Shot National Open Tennis Tournament over the team of Gabrielle Moxey and William ‘JJ’ Fountain.

Young tennis ace falls in second round of ITF 4 Juniors

THE season has been a struggle thus far on the international scene for young tennis ace Justin Roberts as he still searches for a deep run at a tournament title on the European circuit.

WITH only three players entered in the draw, Dominique Mortier only needed to play one match to become the Bahamas Lawn Tennis Association’s Junior Nationals girls 18-and-under singles champion.

Bahamas in 2nd after 2-1 loss to Puerto Rico

AFTER winning their first two matches with 3-0 sweeps in the American Zone III Davis Cup tie at the Shaw Park Tennis Facility in Trinidad &amp; Tobago, the Bahamas men's national team lost their first match in the Group B round robin play on Wednesday.