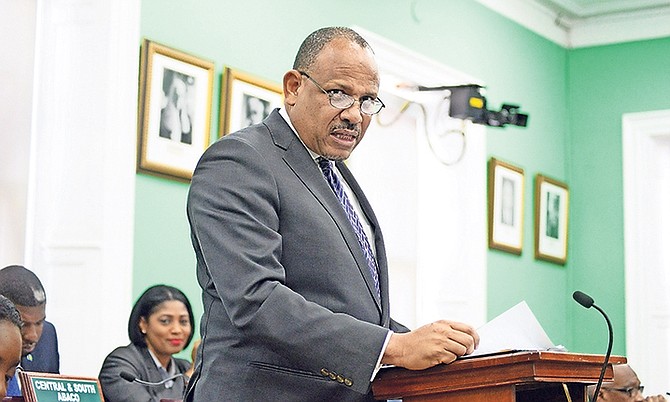 THE Minnis administration will consider changes to policy on medicinal marijuana following the completion of a report from a CARICOM task force on the herbal drug, Health Minister Dr Duane Sands told Parliament yesterday.This report, he said, is expe

HEALTH Minister Duane Sands yesterday suggested the government consider a nationwide HIV testing campaign in the wake of a Ministry of Health report that estimated 1 in 50 people in The Bahamas has the virus.“We should be demanding that every single

‘We must do better for young doctors’

AS some junior doctors express concern for their future, Health Minister Dr Duane Sands admitted yesterday officials must do a better job at developing young doctors.

No demonstration held by doctors after Sands alert

AFTER saying on Sunday officials expected junior doctors to demonstrate Monday, Health Minister Dr Duane Sands said yesterday “there was no disruption” of healthcare services in the country.“The Bahamas Doctors Union requested a delay in the meeting

‘Sick out’ nurses turn the screw

MORE than 200 registered and trained clinical nurses staged a “sick out” yesterday amid mounting tensions between Bahamas Nurses Union and the Public Hospitals Authority over long-standing issues.

ONE hundred and ninety-five dead bodies are being kept at Princess Margaret Hospital’s Morgue as of Wednesday – triple the number the facility was built to maintain, according to Health Minister Dr Duane Sands.

NHI reform 'not a solution for all healthcare ills'

Minister of Health Dr Duane Sands warned yesterday reform of the National Health Insurance programme is not a solution for all the Bahamas’ healthcare ills.Dr Sands was in Grand Bahama for the official launch at the Rand Memorial Hospital of a ctivit

A FORENSIC audit will be conducted on contracts issued by the Public Hospitals Authority (PHA) under the former Christie administration, with concerns agreements worth millions of dollars were issued “illegally” and “abnormally”.

Bid to recruit nurses as Bahamians head to US

HEALTH and education officials were called in at Garvin Tynes Primary School after an errant social media post suggested the school was concealing a tuberculosis outbreak, leading to mass panic among parents who showed up in droves to collect their children yesterday.

On alert for Aussie flu virus

HEALTH Minister Dr Duane Sands is encouraging Bahamians to get their annual flu vaccine as a precaution against the deadly Australian or “Aussie” flu virus that is spreading around the world.

A long-anticipated legal opinion from the Office of the Attorney General complicates the Minnis administration’s effort to create a National Health Insurance (NHI) programme that fits its preferences and will likely limit the administration’s ability to quickly accomplish its NHI goals, Health Minister Dr Duane Sands confirmed yesterday.

PUBLIC Hospitals Authority officials have decided to delay for 60 days several across the board fee increases at the Princess Margaret Hospital, including those proposed for PMH’s Morgue Department, Health Minister Dr Duane Sands said yesterday.

Sands - NHI has to be paid somehow

THE Minnis administration has not made a decision on whether an additional tax must be introduced to fund National Health Insurance (NHI), Minister of Health Dr Duane Sands told The Tribune yesterday.

Screening to test for tuberculosis

THE Ministry of Health in collaboration with health workers will be conducting screening for tuberculosis (TB) in Eleuthera and Exuma, Health Minister Dr Duane Sands announced yesterday.Addressing parliamentarians, Dr Sands said The Bahamas ranks in