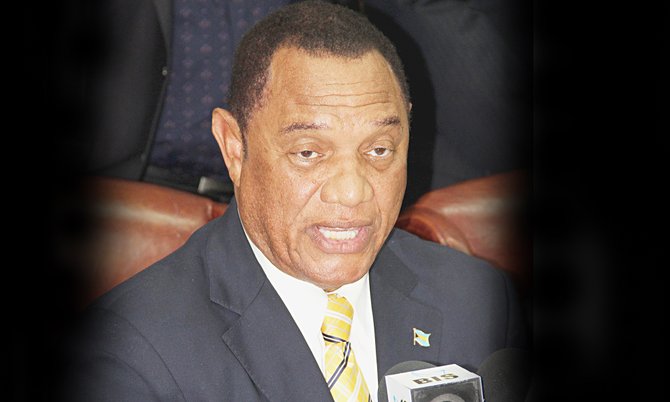 Govt 'determined' to battle crime after year in which murders rose

THE government remains “determined and committed” in its ongoing battle with violent crime heading into the new year, according to Prime Minister Perry Christie.

THE re-establishment of full diplomatic relations between Cuba and the United States can have a “massive economic impact” on The Bahamas, according to Prime Minister Perry Christie.

PM ‘will speak on LOI issue’

PRIME Minister Perry Christie yesterday said he has not spoken to Bamboo Town MP Renward Wells since he was fired as parliamentary secretary in the Ministry of Works last week.

PM: It's kill or be killed

PRIME Minister Perry Christie lamented the backlog in the judicial system that allows accused murderers out on bail, many of whom are later killed or commit new crimes while on the street awaiting trial.

PLP's second anniversary is an opportunity to discuss concerns

PRIME MINISTER Perry Christie said yesterday the government will use its second anniversary in office as an opportunity to have an open discussion on the concerns of the country. Mr Christie said while the anniversary is a major achievement there is still much more work to be done – work the PLP intends to do with the help of the public. He is expected to make an important announcement next week.

ECONOMIES of the Caribbean region are gradually changing from being goods-based to becoming service-based, it was reported last week at an international conference.

PRIME Minister Perry Christie has pledged the country’s full support regarding anti-money laundering initiatives along with a concerted effort to combat the financing of acts of terrorism. Mr Christie said serious attention to the financial services sector in particular was important as more countries in the region are moving away from being based on goods to a delivery of services.

THE home of VAT co-ordinator Ishmael Lightbourne yesterday had new locks fitted and the family were seen taking boxes away from the property – despite Prime Minister Perry Christie’s intervention to try to prevent the bank from taking possession of his home.

THE $1 million donation by Albany developers to the Urban Renewal Foundation had no impact on their joint venture bid to acquire South Ocean resort, according to Prime Minister Perry Christie.

Government 'undecided' over VAT, rate to be under 15%

THE Christie administration and developers of Albany last night signed and sealed an amended Heads of Agreement which will allow for a $140m expansion of the western New Providence project.

FREEPORT – Prime Minister Perry Christie says the millions of dollars collected by the US for its control and management of the Bahamas’ airspace is a matter of deep concern for his government.

PM to form committee to give web shop advice

PRIME Minister Perry Christie announced he will be forming an economic committee to advise him on how to move forward on the issue of web shop gaming in the Bahamas.

$20m in contracts for Andros institute

PRIME Minister Perry Christie yesterday announced the release of more than $20 million in contracts for development of the Bahamas Agriculture and Marine Science Institute in North Andros.

'No politician has stepped up to replace Christie'

NO politician has stepped up and shown that he or she can replace Prime Minister Perry Christie as leader of the Progressive Liberal Party, former PLP Cabinet minister George Smith said yesterday.

No control of BTC for govt

ONE of the government’s lead negotiators in the BTC take-back talks yesterday publicly apologised for his earlier claim that the purchase of BTC was a “horrible deal”.