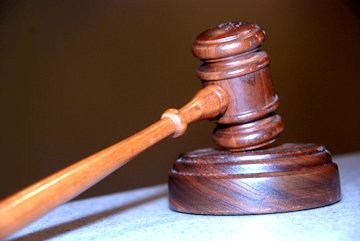 NEARLY five years after escaping detention at a police station by swapping places with his son, being helped by a policeman, and avoiding arrest for four months, convicted drug dealer Melvin Maycock Sr was found guilty of the crime yesterday in Magistrate’s Court.

‘I was in the wrong place’

A MAN on trial with Stephen “Die” Stubbs and two others in connection with a $6 million drug seizure claimed he was in the wrong place at the wrong time when police arrested him.

A SUPREME Court jury was told yesterday that a witness heard murder-accused Jessie Williams telling her husband to stop choking her just before he was killed.

A WITNESS told a Supreme Court jury yesterday that he neither saw his friend with a knife, nor did his friend stab another man to death.

A JUDGE who gets "psyched up" for court proceedings has branded counsel who turn up unprepared a "nuisance and disgrace". Justice Christopher Black

BAHAMASAIR'S US-based middle management staff cannot be included in the Public Managers Union's (PMU) bargaining unit because the Industrial Relations Act does not have "extra-territorial effect", the Chief Justice has ruled.

THREE men are expected to stand trial before Justice Indra Charles today in connection with the May 2011 robbery of the John Bull Rolex Boutique. Prosecuto

A MAN who had been arraigned with eight others in connection with last month's seizure of more than $400,000 worth of marijuana in Inagua was granted bail in the Supreme Court. John Pintard, 52, appeared before Justice Bernard T

THE end of a six-year dispute between the millionaire Weissfisch brothers may not be in immediate sight as the hearing was rescheduled again yesterday morning. The hearing before the Court of Appeal is now set

THREE men convicted for the 2011 home invasion and murder of a phone card vendor must wait another five days for their sentence.

Historic ruling on mandatory sentences due

A FORMER policeman convicted of manslaughter will learn his sentence in five weeks.

Prosecution given deadline by judge in rape case

APPEAL IN MILLIONAIRES' DISPUTE MUST WAIT UNTIL AFTER ELECTION

YESTERDAY'S Appeal Court hearing, expected to end the six-year dispute between the millionaire Weissfisch brothers, did not go ahead as scheduled. It is understood the hearing was rescheduled for May 9 -- two days after the general election. The dispute st

A POWER disruption at the new Magistrates Court complex yesterday morning forced an hour delay in a number of cases and adjournments in others.

ONE of two men on trial for the 2010 armed robbery of a local bank was acquitted yesterday.

Four arrested over theft of vessels worth $500,000

FREEPORT - Four Bahamian men were arrested and two stolen vessels valued at more than half a million dollars were recovered during a joint operation between Bahamian and US authorities.

THE Court of Appeal told a former death row inmate he waited too long to challenge a 2008 ruling.

ATTORNEY General John Delaney exerted his constitutional powers yesterday when he ordered an annulment of a multi-billionaire's private prosecution of eight persons in Magistrate's Court.

ACCUSED drug lord Melvin Maycock Sr had his three year sentence upheld, but was fined an additional $250,000 by the appellate court after it dismissed his appeal to overrule a drug possession conviction for $1.2 million worth of marijuana.

THE Supreme Court has been busy over the last four months issuing asset freeze and document production Orders relating to an alleged $160 million international fraud, which has involved - albeit unwittingly - a Bahamian-domiciled investment fund and accounts at a well-known international bank.

Pair in court over robbery and murder

A WELL-known QC yesterday said his clients were being left with no choice but to file Judicial Review proceedings to halt a proposed 16-room boutique resort project on Exuma's Stocking Island, arguing that the Government's failure to follow the Planning and Subdivision Act was "a glaring example of the challenges" faced with Family Island developments.

Tourist to sue over nightmare 24 hours

A FLORIDA woman has filed legal action against Carnival Cruise Lines over allegations that she was wrongfully stripped and cavity searched as a minor on board a cruise in The Bahamas.

AN ATTORNEY who refused to submit to new measures at the Magistrates' Court complex requiring body searches for contraband is considering legal action after claiming a senior police officer assaulted him.

A 22-YEAR-OLD murdered a man whose body was found riddled with bullets on a track road.

A SUPREME Court jury convicted 36-year-old Prince McPhee of manslaughter yesterday after unanimously deciding he did not murder the country's 47th homicide victim in 2010.

A LANDMARK court ruling was made yesterday on a father's obligation to pay his child's tuition fees whether or not he agreed the private school she attends.

Man innocent of murder of victim shot in bedroom

FREEPORT - Samiko Rigby was discharged of murder, armed robbery, and burglary in the Supreme Court on Tuesday.

A MAN's admission to possessing 60 pounds of marijuana with intent to supply saved three young women from being remanded with him to Her Majesty's prison yesterday.

Murder trial due to resume today

FREEPORT - Following a two-day adjournment, the murder trial of Samiko Rigby is expected to resume today.

Man guilty of sex with girl

FREEPORT - Darlin Jean was convicted this week in the Supreme Court of unlawful sexual intercourse with a minor. Jean, 27, was charged with having unla

Police officers' trial due to start

A number of foreigners held over drugs seizure

A BAHAMIAN-Amercian man, six Bolivians, a Brazilian and two Turkish men were arraigned in Magistrate's Court in connection with a drug seiz

By NEIL HARTNELL Tribune Business Editor Clients of a failed Bahamian broker/dealer are seeking a Supreme Court order that would assign them the right to sue those deemed responsible for their collective $24.5 million loss, fearing they may lose forever

MAN CALLS FOR LENIENCY, SAYING HE DID NOT INTEND TO HARM ANYONE

By LAMECH JOHNSON ljohnson@tribunemedia.net AFTER pleading guilty to firearm and ammunition possession, a Farm Road man begged the Magistrate's Court for leniency, saying he did not intend to cause harm with the weapon. Before his sentencing yesterday m

NO BAIL FOR VIOLENT CRIME SUSPECTS

NO BAIL FOR VIOLENT CRIME SUSPECTS By LAMECH JOHNSON ljohnson@tribunemedia.net THREE men, two charged with murder and the other attempted murder, are behind bars at Her Majesty's Prison waiting to be brought before the courts in the next three months. T